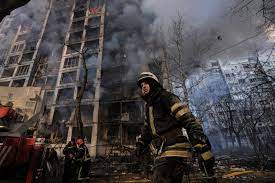 The Ukrainian city of Mykolaiv has recently been bombed. The mayor reported that a building had been attacked. An 11-year-old boy was rescued from the rubble and finally died in hospital.

The invasion of Ukraine 2022 began on 24 February and since then the war has left thousands of dead, refugees and damaged infrastructure in the country. The use of kamikaze drones extends into the Russian-Ukrainian war and attacks civilian targets.

An 11-year-old boy was rescued from the rubble during the attack of the Russian Army in recent days. They managed to rescue him and moved him to a hospital, where he died shortly after.

The Ukrainian city of Mykolaiv, in southern Ukraine, has recently been bombed. The mayor says it is a “massive” attack by Russian troops.

“After the first night, they have massively bombed Mykolaiv. A five-story residential building has been attacked,” Senkevich explained on the 13th of October.

The Russian Deputy Prime Minister, Marat Jusnullin, announces that the Government will help organize the transfer of the residents of Kherson to Russia after the regional governor, Volodomir Saldo, asked the citizens to leave because of the bombings.