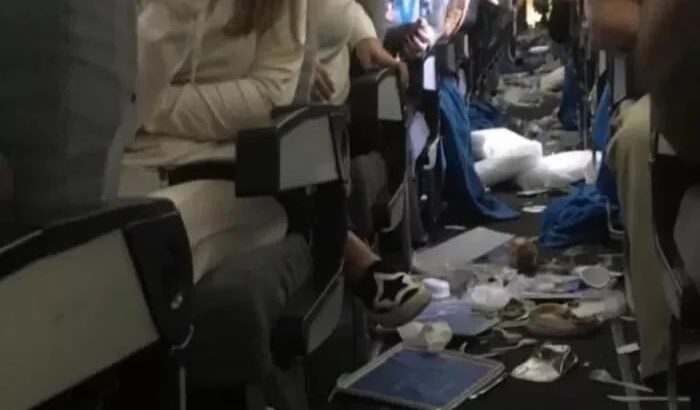 Twelve passengers have been injured by “severe turbulence” on an Argentine Airlines flight from Madrid while flying over the Atlantic Ocean. Three of the twelve passengers have had to be admitted and remain “under observation” for minor injuries at the Ezeiza Hospital, while the remaining nine have been treated at the site by emergency personnel.

Flight AR1133, with 271 passengers and 13 crew on board, from Madrid began to be affected by the turbulence near Brazil. The plane landed at the Ezeiza International Airport at 4.30 am (local time), after taking off last night from the Adolfo Suárez Madrid-Barajas airport at 20.21.

When the aircraft was over the Atlantic Ocean before starting to fly over Latin America at Recife, when it still had more than five hours of flight to reach Buenos Aires, it ran into “severe turbulence” which caused an unusual movement inside the cabin. According to the crew, the seat-belt indicators were already on and the announcement had been made for the passengers to remain in their seat.

It was precisely the passengers who were most affected by the turbulence. Three of them had to be taken to the hospital because they had not fastened their seat belts. Before landing in Buenos Aires, the crew requested the intervention of the medical services to wait for the arrival of the plane and that the wounded could be treated at the same airport.

After being treated by the emergency services, nine of the twelve passengers affected have been referred to their respective homes, while three others, with various apparently minor injuries, were transferred to Ezeiza Hospital for a more thorough check. The Airbus A330 with registration LV-FVH, which has the special livery of the Argentine National Football Team for the World Cup in Qatar, has not presented significant damage in its structure, as indicated.

“Turbulence occurs when two air masses of varying temperature or velocity collide. These can produce sudden movements in the aircraft according to their intensity, although in no way endanger the safety of the aircraft,” aeronautical sources told Télam. “They are usually common in certain regions and times of year and aircraft are generally alerted to their presence by the weather radar that the aircraft possesses and avoid them, although sometimes, due to their magnitude, they have no choice but to face it and try to overcome them in the least uncomfortable way possible for passengers”.

They have also explained that within the most common routes for Argentines, those that pass through the Andes, those that cross the area of Ecuador, the Amazon and the Atlantic Ocean, are the most prone to suffer turbulence. “This does not mean that there will always be turbulence. But it can be expected”. The same sources have explained that “most of the time, the flight takes place with only some moments of very slight turbulence. What happened with this Airlines flight is usually the exception”.