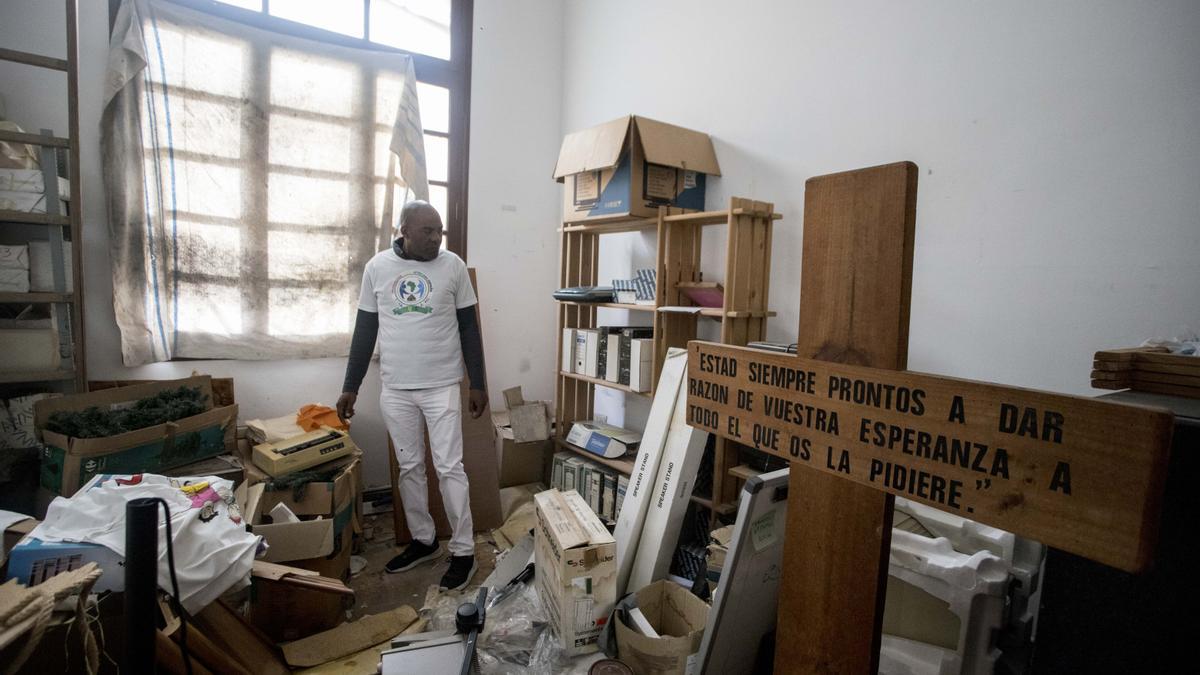 The African Union of Spain denounces that the building is in very bad condition and asks to act before a tragedy happens. It is, apparently, a school from the 60s that was reconverted as a center for Catholic youth.

Beside a photograph of Pope Francis, on a dirty mattress lying on the floor, sleeps a young Senegalese man who risked his life to pick oranges in Valencia. He migrated with the aim of arriving in time for the citrus season, to get to work and build a future.

He now sleeps in a classroom of an abandoned Catholic school near the center of Valencia. In the corner of the room there is a small library with books, papers, a computer, blackboards and even a photocopy machine.

And there are fifteen of them; they come from Mali, Gambia and Senegal. Even social services didn’t know about it until now, even though they’ve been there for three months. The neighbors consulted have neither complaint nor knowledge of it. Sources from the city explain that this same Wednesday they will send staff to offer assistance.

But that’s not the most worrying thing. The school, especially on the second floor, have huge cracks in the walls and floors. Mohamed Mboirick, spokesman of the African Union of Spain denounces that “something must be done before a disaster occurs”.

The school has three rooms with the frames smashed open. It seems that, one day, everyone left and left the rooms as they were still full of archives, documents, and blackboards with past events organized by the community, including brochures, drawings and news hanging from the walls. In fact, the migrants have barely touched anything, they have just thrown their mattresses on the floor.

It appears to be a school built in the 1960s which was later converted into a centre for Catholic youth and then abandoned. On the floor below there are two other mattresses placed in what were once public bathrooms, but now they are completely full of dirt with a door that does not even close. All there are are plastic bags, some cleaning product and two pairs of someone’s slippers.

Nobody knew about them until recently, except for a neighbour in the area who warned authorities about the situation. This neighbour has been giving water and food to the seasonal workers, washing their clothes at home and is the one who keeps the passport and other documentation (which is everything for these people) in his house, the safest place possible for someone who does not have a decent roof.

Most of these people are nomads, and hardly anyone came directly from Africa to Valencia. “Most come from Zaragoza or Lleida, from other seasons in the countryside. Now they have moved here because soon the orange picking season in Valencia begins,” says Mboirick.

All but one. A Senegalese man who decided to migrate from his country and risk his life in the Mediterranean with the plan to get work in Valencia, in the orange picking field. ” These people are almost never here, they are always on the street looking for a place to stay or work in any way and wherever, some in the countryside, others in the scrap metal and the rest doing tinkering or working wherever they are paid or not,” says Mboirick.

The reason is simple: they have no choice. The current regulations on foreigners prevent them from having access to a work permit, nor to papers or residence, so they are driven to slave labor and very low pay.

“They usually go jumping from city to city depending on the season in the countryside. Zaragoza, Lleida, Barcelona, Valencia, Málaga… They’re testing where they can get work until they get something more fixed somewhere. Fixed can mean in a workshop as a mechanic even if it’s paperless. Explains the African Union spokesman.

The working conditions in the countryside border on slavery, but as the representative of the African Union points out “they have no other choice”.

” Those who come from Zaragoza or Lleida come directly to these places to live here during the weeks of the orange picking season and then leave. They are also abandoned places, like this one, where obviously conditions are not as they should be,” he explains.