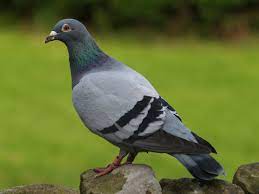 The disease is spread through feces and other secretions.

The UK has activated an alert after detecting a virus that strangely affects the neurological system of pigeons, which prevents them from flying. British authorities have confirmed that this situation has been recorded in birds on the island of Jersey, which are already known as ‘zombie’ pigeons.

From the JSPCA Animal Shelter on the island of Jersey, they have confirmed that in recent weeks “there has been an increase in the number of pigeons on land entering the shelter, many of which have shown neurological signs such as twisting the neck or not being able to stand”.

In addition, they have explained that on other occasions birds also present important injuries “as a result of not being able to maintain balance or fly well”. In this sense, they have detailed that it is advisable to sacrifice the infected pigeons to avoid suffering the spread of the disease, since at the moment there is no cure. ” They usually die within a few days, and any pigeon who survives will continue to carry the virus and be a risk to other birds. The virus can survive longer in the colder and wetter months, which means that cases are more common at this time of year,” they said.

The authorities have asked the population to be very careful with the matter because although the disease is not transmissible to humans, it can cause conjunctivitis to those who handle sick birds.

What happens with them is that after contracting the virus they get sick with the paramixovirus PPMV, or Newcastle disease, a highly contagious infection that attacks the nervous, respiratory or digestive system. Clinical signs include paralysis of the wings and legs, twisted neck, displacement in circles, spasms, diarrhea and even a partial or complete interruption of egg production.