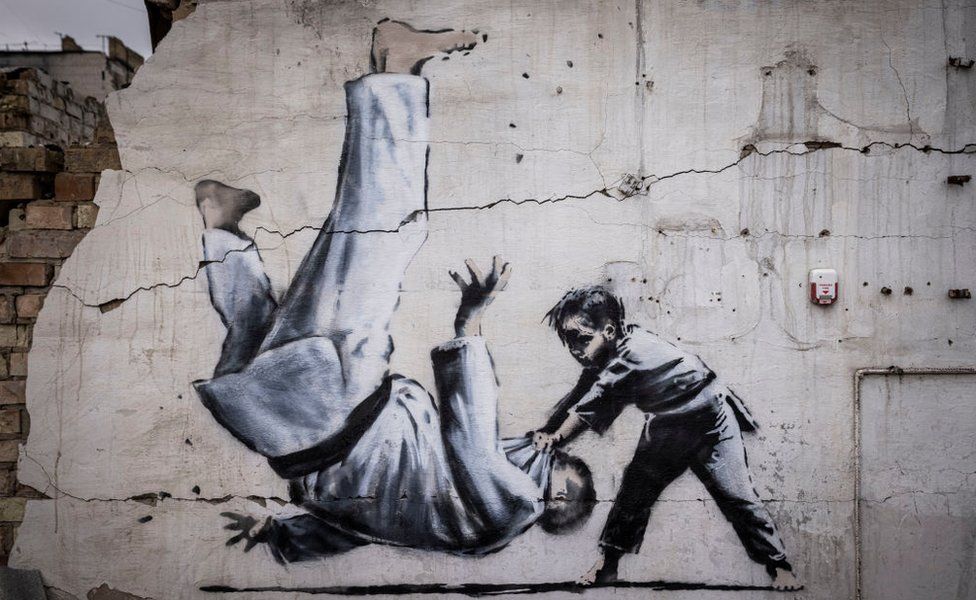 The British artist Bansky has stamped another graffiti in the town of Borodyanka northwest of Kiev. Like all his art, it has had a great repercussion and there has been speculation about its authorship.

In the midst of the ruins of this war, art survives. This gymnast doing a hand stand or this child doing judo have been captured in the wreckage of a Russian bombing. The two drawings are believed to be the work of the famous British artist Banksy. They were found in the town of Borodyanka, northwest of Kiev.

The artist himself has posted on his Instagram account the images of the drawing, which is why it is practically taken for granted that they are of his authorship. It is not the only Bansky graffiti that has appeared in recent days.

Also in Kherson, a painting of a child wrenching Vladimir Putin has appeared. In another of the graffiti that appeared, two children play on a seesaw. In another, a gymnast practices with a ribbon on the walls of a ruined building.

The Ukrainian military have entered the town of Kherson and Russian flags are no longer flying in the area. The population has welcomed them as heroes, although they are worn out as they were completely cut off without water and electricity.

The military has distributed food among the 70,000 citizens who remained in the city. In addition, work is already underway to clear the area and the train is expected to reach the city as soon as possible to connect it with the rest of Ukraine.