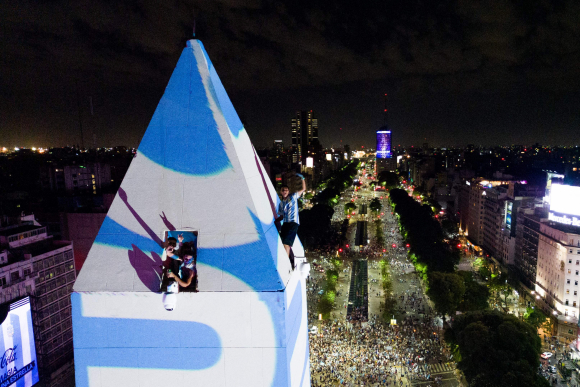 Dozens of fans forced open the door and climbed to the top of the Buenos Aires monument. Firefighters evacuated the Obelisk to avoid a tragedy at 68 meters.

Total madness in Argentina with the World Cup celebrations. Thousands of people spent hours in the Plaza del Obelisco of Buenos Aires and some even broke into the monument, ascending to the highest point.

Several fans forced the front door open using a sledgehammer and then began the ascent. With the ladder collapsed and full of fans who tried to climb, some came up and peeked through the windows. Finally, on Tuesday morning, firefighters evacuated the fans to avoid a fatal crash at 68 meters.

An absolutely lamentable image in one of the great monuments of Buenos Aires and Argentina. But that madness could end very badly. One of the fans took it even further and hung on to the sides of the tip to take a selfie with his entire body outside the interior of the structure, located in the Plaza de la República.

The commentators of CN5, did not believe the images that showed the drone that flew over the epicenter of the Argentine party. “¡ Crazy, the image is terrible! It makes no sense… He must be tied up, I trust he is tied up,” reporters were heard saying with obvious concern about what they were seeing.

One of the commentators wondered how they had had access to the interior of the Obelisk, to which another replied that they would surely have jumped the fence of the iconic monument of Buenos Aires.

In the end, after the party there were serious disturbances in the surroundings of the Obelisk. The incidents were recorded when police tried to disperse fans, many of them intoxicated, that still remained at the foot of the Obelisk preventing a group of firefighters from accessing the emblematic monument to try to lower a person who had climbed to the top of the milestone, at risk of falling from the 68 meters.

The fans reacted by throwing stones and bottles at the police officers, who in turn tried to disperse them with loud ammunition and rubber bullets, according to local television images. At least three deaths have been reported after the night.

Around four million people gathered this Tuesday on 9 de Julio Avenue and it’s surroundings to celebrate the arrival of the team captained by Leo Messi, who won the third World Cup title for Argentina in Qatar 2022 after a well deserved victory against France.