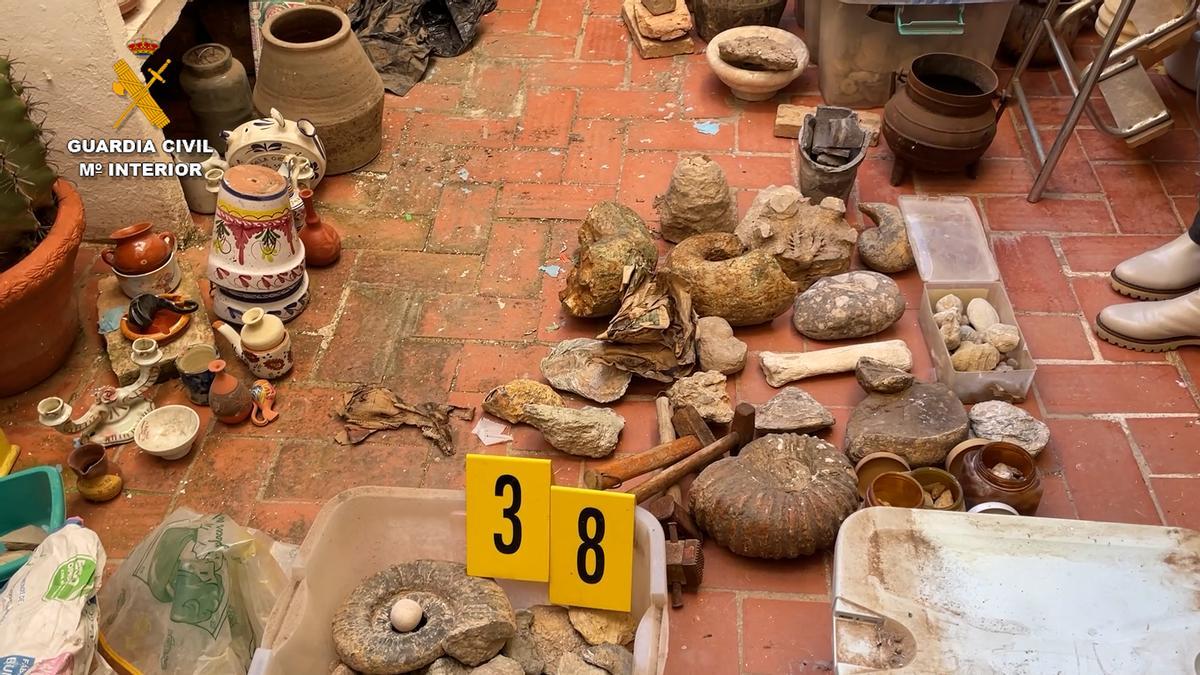 Among the recovered materials are Phoenician and Punic amphorae, bronze and neolithic age mills, Roman finds, a skull, a sword from the twelfth century, mosaic tiles, fossils and much more.

Archaeological treasures hidden in two houses in Denia and Gata de Gorgos. The Guardia Civil, in the so-called Operation Osarium, has investigated two men as alleged perpetrators of a crime of misappropriation in its aggravated form of assets of historical, cultural and scientific value. One of the largest illegal private collections in the province of Alicante has been discovered.

The investigation began last November, when the officers learned, through the Gata de Gorgos Local Police, that there were several old bone remains inside a house in that town.

In a first phase, through the collaboration of an archaeologist from the Municipality of Javea, the bone remains found in the home of Gata de Gorgos were dated between 4,000 and 5,000 years old.

Given the need to catalog the archaeological pieces found and determine their provenance, the collaboration of the technical inspection of the Ministry of Culture of the Generalitat Valenciana was requested, which determined that the collection was illegal, since they didn’t have any documents to guarantee his tenure.

The collaboration of the owner during the research allowed the researchers to discover a larger collection in a home in Denia. The agents made a forced entry and inside found a large amount of archaeological and paleontological pieces. The pieces had allegedly been inherited by the current resident from the home of a deceased relative. However, he did not have any documentation to justify owning them, nor did he take any steps to regularise them. In this register, the Department of Education, Culture and Sport of Alicante collaborated.

Among the pieces seized in this house, include:

– Five amphorae of Betic, Phoenician and Punic origin.
– Five Bronze Age and Neolithic Mills.
– Five weights of a loom from the time of Ancient Rome.
– A human skull.
– An iron grenade and various cannonballs of the S. XVIII.
– More than 1,000 tesserae forming mosaics from the Roman era.
– Various fossil ammonites and nautilus.
– Ceramic material from the period from the Bronze Age to the middle of the S. XX.
– Several Roman ointments.
– Flint tools from the Paleolithic.
– Half a sword of the S. XII
– Fauna and archaeological malacofauna shells
– Roman latericium and lots of fossils.
Among the objects and documents seized, investigators have found a large number of notebooks, all of them handwritten by the deceased relative. They show notes of the exact places (sites) where the pieces were found.

Studies performed by specialists could help to determine the date of origin and context of the pieces, thereby increasing the value of said pieces, and even facilitating the location of new archaeological sites.

The volume of archaeological and paleontological pieces found has required the assistance and collaboration of the Archaeological Museum of Denia belonging to the Sociocultural Area of the City of Denia, who has enabled a suitable place for its conservation and deposit.

The Guardia Civil has investigated the two owners of these illegal private collections as alleged perpetrators of a crime of misappropriation in its aggravated form of assets of artistic, historical, cultural and scientific value. Both investigations have been reported to the Court of First Instance and Investigation No 1 in Denia.

The operation Osarium has been carried out by the Territorial Team of the Judicial Police of Javea, Command of Alicante, within the “Plan for the Defence of the Spanish Historical Heritage”.