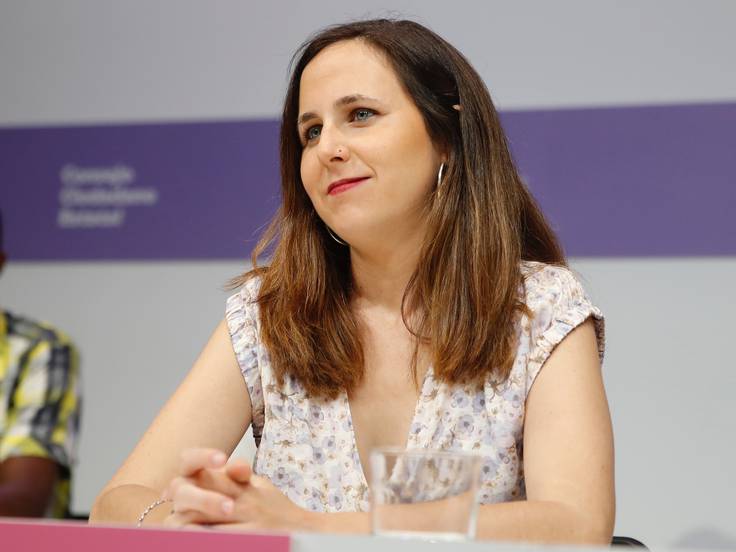 The formation of Belarra, which has put on the table different proposals of social court at the beginning of the electoral year, now demands to recover the pre-war values in Ukraine.

Podemos takes the initiative at the beginning of the electoral year to place its proposals of social court and to establish a position in front of the PSOE and the Vice-President herself Yolanda Díaz. The training led by the Minister of Social Rights, Ione Belarra, has asked this Monday to intervene the food market and set maximum prices for certain basic products. The request comes just two days after the party announced in an act which will be one of its main measures for the upcoming elections, a subsidy of between 700 and 1,400 euros per month to guarantee a soil income to the citizenry, and occurs in a context of economic uncertainty. Inflation dropped in December to 5.7%, but the shopping basket reached 15.7%, an increase that all households in Spain perceive and that has led the government to take measures. The Executive already approved at the end of the year, in the latest package against the crisis, a cheque of 200 euros for families with income below 27,000 euros and the abolition and reduction of VAT on certain products.

Last September, it was Díaz who opened the debate by proposing a pact between the big distributors to reduce the costs on a series of foods. Podemos now goes a step further and asks to establish as a maximum price the one that had the basic basket when the invasion of Russia in Ukraine began, on 24 February last year. They want this limit to be in effect for at least 2023. Party sources explain that this is similar to what was done with masks and antigen tests in the covid-19 pandemic and suggest that to prevent small businesses from suffering situations of “financial stress”, the measure is accompanied by “direct aid to the sector”, as approved at the time for hospitality.

In the event that the PSOE, majority partner of the coalition, does not support this proposal, the same sources point out that Podemos “opens to study” a price bonus for basic products, such as the one made with fuels, up to February 2022. “Since this second route would involve allocating public resources, it should be complemented by two other initiatives,” the party warns. An “extra tax” on the big distribution chains -a proposal that Unidas Podemos already unsuccessfully took to the negotiating table of the decree of measures against the crisis approved at the end of December- and “economic sanctions” to companies taking advantage of the bonus to increase their profit margin.

At the moment, the leadership of Belarra does not clarify whether the proposal, which is idea of the party (not of the parliamentary group, where there are also IU and the commons), would be processed through the Council of Ministers or through an initiative in the Congress, something to negotiate with the socialist wing of the government and within its own space, coordinated by Díaz.

We can face the start of the year “with courage”, convinced, especially after the approval of the latest anti-crisis package, but also by the cap on gas or taxes on energy and banking, that its usefulness in government has been “demonstrated”. Nevertheless, sources of the formation are convinced that to “revalidate” the Executive in the elections at the end of the year, it is necessary to give the ideological battle, confronting the model offered by PP and Vox, above in the polls. In this sense, the organisation stresses that it is “imperative” that the coalition take “courageous measures”, as it did with intervention in the energy and transport sectors, which they value very positively.