A version of Theresa May’s Withdrawal Agreement that emerged from cross-party talks could break the deadlock over Brexit, a Welsh Labour MP has claimed.

Stephen Kinnock made his suggestion as Parliament began a five week suspension amidst turmoil over the UK’s exit from the European Union.

Mr Kinnock is part of the “MPs for a deal” group at Westminster.

A “sensible pragmatic compromise” was better than both “extreme” sides of the Brexit debate, the Aberavon MP said.

It follows the second defeat of Prime Minister Boris Johnson’s call for a snap election and unprecedented scenes in the House Commons, with some MPs protesting against the suspension with signs saying “silenced” while shouting: “Shame on you.”

UK law states the country will leave the EU on 31 October, regardless of whether a withdrawal deal has been agreed with Brussels or not.

But new legislation, granted royal assent on Monday, requires the prime minister to seek a delay until 31 January 2020 unless a deal – or a no-deal exit – is approved by MPs by 19 October.

Yet Mr Johnson has said the government would use the time Parliament was suspended to press on with negotiating a deal with the EU, while still “preparing to leave without one”. 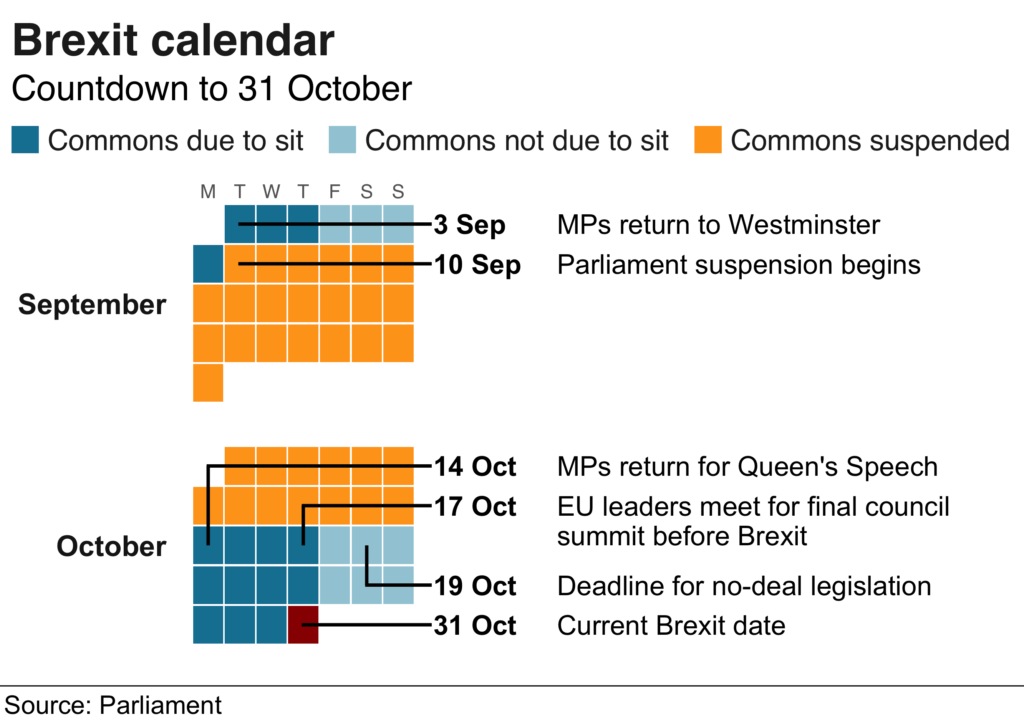 The Withdrawal Agreement Mrs May negotiated with the EU was defeated three time in the House of Commons.

Talks between Labour and her government on making changes to that deal broke down in late spring, shortly before she announced her resignation.

Unlike the Labour leadership, Mr Kinnock has not supported his party’s shift to backing another EU referendum.

Mr Kinnock said he was not suggesting “we have to have a carbon copy of the withdrawal agreement bill which came out of the cross-party talks, but certainly it is a realistic foundation”.

He told BBC Radio Wales’ Breakfast programme: “We have been paralysed by our extremes for far too long – those who want no Brexit at all on one extreme, and those on the other side who are quite happy to crash out with no deal at all which would wreck the British economy.

“My view is that the majority is still very much in that space of compromise of wanting to find a way forward. Let’s stop the tail wagging the dog.

“Let’s bring the majority of sensible, pragmatic, compromise-driven MPs together and our MPs for a deal group is seeking to achieve that.”

But a Parliamentary source told BBC Wales: “No one sensible seems to think this has legs.”

“The ERG [European Research Group of pro-Brexit Tory MPs] will kill it from the other side and Boris couldn’t risk the optics of bringing back” Mrs May’s deal, the source added.

“There has always been and remains a compromise that I believe could command the majority of the House of Commons – and which twice showed the highest level of support of any option,” he said.

“A credible Brexit deal put to a confirmatory public vote, with the option to take that deal and leave, or to keep the deal that we already have, has ever more growing support in Parliament and the public.”

Later on Tuesday morning, Mr Corbyn said Labour would commit to a public vote with a “credible option to leave and an option to remain”.

Addressing the Trades Union Congress in Brighton, the opposition leader said he wanted an election, but he would not “allow Boris Johnson to dictate the terms”.

Stephen Kinnock’s proposal is the only one around – a mash up of Theresa May’s Withdrawal Agreement and concessions she offered to Labour on things like workers’ rights.

Mr Kinnock points out that MPs never got to vote on that version.

Also note that since taking office, the only part of the Withdrawal Agreement Mr Johnson has objected to is the backstop – the device to avoid a hard border on the island of Ireland.

His objection is that if triggered it would lock the entire UK into the EU orbit indefinitely. But there’s talk now of limiting the backstop to Northern Ireland.

Is that a compromise that could allow the prime minister to declare his concerns have been allayed? And would that allow a new version of the Withdrawal Agreement to be put before MPs?

It would certainly get the prime minister out of the hole he’s in. Right now the law says he has to ask for an extension if there’s no deal agreed by the end of October – the date we were supposed to leave. Mr Johnson says he’d rather be dead in a ditch.

So what are his other options? Resign, but would he want to hand the keys to No 10 to someone else? Break the law, and end up in court?

Or come back from the mid October EU summit with an agreement on the backstop and put a different version of the Withdrawal Agreement before MPs for a vote in the final days of October with a view to delivering Brexit by the “do or die” date he promised?

You can see the logic – perhaps Mr Kinnock’s suggestion is the rope ladder out of the hole.

MPs are pouring cold water it, but could it be a way for the prime minister to say to voters “I’ve tried everything to get us out”.

There are a lot of questions in all this and here’s one more: if that is the route the UK government chooses, could they get enough MPs to support it?