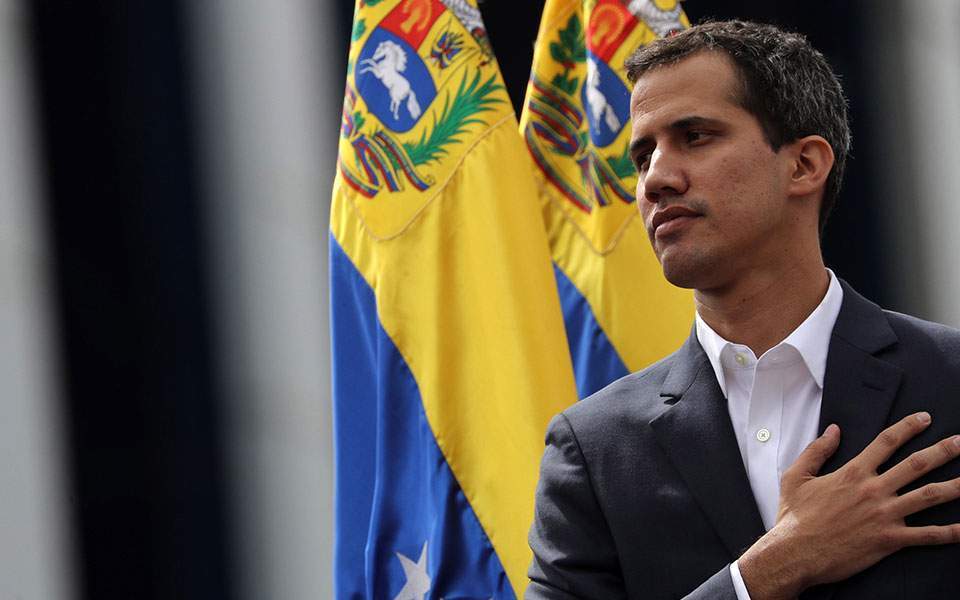 MADRID – Venezuela opposition leader Leopoldo Lopez is forming a shadow government from his refuge at the Spanish Embassy in Caracas, despite an agreement that prohibited him from engaging in political activity when the embassy granted him asylum five months ago.

Lopez sought the protection of Spain’s diplomatic mission after he led a failed coup against embattled President Nicolas Maduro in April. He was backed in the effort by parliamentary president Juan Guaido, who is recognized as the transitional head of state by the United States and 50 other countries.

Guaido says that he has named Lopez to form a “center of government,” or shadow cabinet, to prepare for an eventual takeover by the opposition, as U.S. sanctions bite into Maduro’s remaining lifelines.

Spain says the conditions under which they took in Lopez have not changed. But Maduro’s growing isolation and Venezuela’s deteriorating economy may be forcing the hand of EU governments, which have been trying to broker a deal between Maduro and his opponents on terms for new elections.

“The conditions on which protection was granted have not varied nor are they affected by the decision of president Juan Guaido to name Lopez General Coordinator for the creation of a center of government,” Spain’s foreign ministry told VOA in a written statement.

In what opposition spokesmen say could be a fatal blow for the Maduro administration, China’s national oil company announced this week that it is suspending oil production in Venezuela due to growing logistical complications and tightened U.S. sanctions. China and Russia have been Maduro’s largest customers.

The Spanish Embassy does not allow Lopez to give interviews. Nor is he permitted to hold political meetings. But he is in daily contact with his father, Leopoldo Lopez Gil, a Spanish national and member of the European Parliament. Speaking to VOA by phone from Brussels, Lopez Gil said his son is busy online with other members of the “shadow cabinet” appointed by Guaido.

“He receives reports and interfaces electronically with economists, jurists, engineers and other experts formulating plans to deal with the desperately urgent problems that a new government would face,” Lopez Gil said.

“We want to be positioned to take the bull by the horns without falling in the mud as happened in Panama,” he said, referring to the days of heavy fighting that followed the 1989 U.S. invasion of Panama to topple Gen. Antonio Noriega.

Exiled Venezuelan retired admiral Ivan Carratu, who maintains a network of contacts inside Venezuela’s military, says that Lopez’s project is unlikely to attract support from Venezuela’s armed forces, who hold the key to any peaceful transition of power.

“The main purpose of the shadow government is to project the figure of Lopez as future president in whatever scenario unfolds,” Carruto said.

Even if Maduro is ousted, Lopez Gil said, outside military assistance may be needed to counter armed resistance that is likely to develop from radical pro-Maduro “colectivos” headed by Cuban advisers and linked with Colombian leftist guerrilla groups controlling vast chunks of Venezuelan territory.

Lopez Gil said a “reactivation” of guerrilla activity announced last week by FARC leader Ivan Marquez — who is based in Venezuela — is “highly worrying.”

Colombian security analyst Jose Marulanda Marin believes the effort to form a parallel government is likely to have “little effect,” but he worries about attempts to assassinate key participants who are now living in exile in Colombia. Those include former parliamentary speaker Julio Borges, who was named last week as foreign minister in the shadow cabinet.

U.S. coordination with the shadow government is being handled through a Venezuelan Affairs Unit (VAU) at the American Embassy in Colombia. The unit is directed by U.S. diplomats who were expelled from Venezuela after being accused of supporting coup plots last year.

“The VAU will continue to work for the restoration of democracy …the security and well-being of the Venezuelan people …interacting with the government of interim president Juan Guaido,” Secretary of State Mike Pompeo has said.