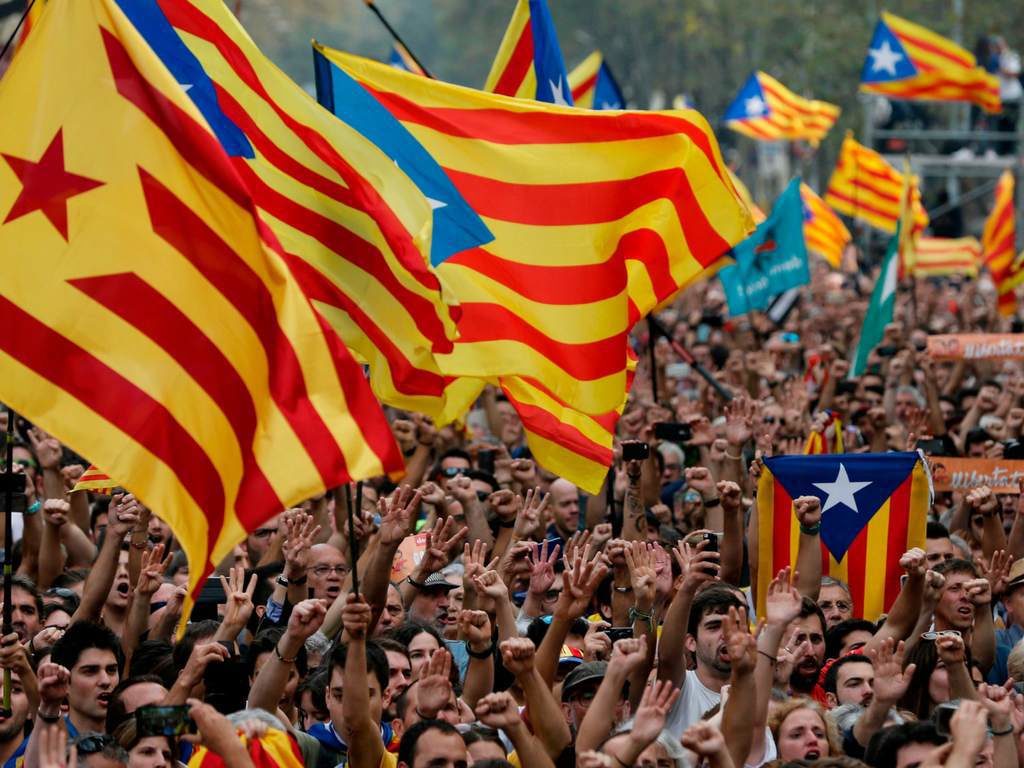 BARCELONA (Reuters) – Tens of thousands of Catalans waving pro-independence flags and chanting “Independence now!” gathered in Barcelona on Wednesday to call for a break from Spain, but turnout was far less than at past such rallies amid divisions among separatist parties.

The annual pro-independence rally took place at a defining moment, with regional and national politics in turmoil and a much-awaited court verdict on a 2017 botched bid for independence expected early next month.

Local police estimated the turnout at about 600,000, only the second time in eight years of massive pro-independence gatherings in Barcelona on Sept. 11 that fewer than a million people have turned up.

Elisenda Paluzie, chairwoman of Assemblea Nacional Catalana, the grassroots organizations behind the protest, told Reuters this had been the “hardest” secessionist protest to put together since they started in 2012 because of the separatists parties’ divisions and the lack of a clear road-map.

“I value a lot people’s persistence and resilience in coming out massively to the streets,” she added. She said she thought turnout was higher than police estimates but did not give any numbers.

Despite anger in the crowd over the lack of unity among separatist parties on what strategy to adopt towards Madrid, Wednesday’s large, peaceful gathering in central Barcelona showed Catalan separatism remains a major challenge for Spain.

Many protesters on Wednesday brandished signs reading “We will do it again”.

In 2017, Catalan leaders defied courts and conducted a referendum on secession and then declared independence.

That confrontation saw police wielding batons at crowds seeking to vote and prompted the then-conservative government to temporarily impose direct rule from Madrid on the region.

A Supreme Court ruling is expected in early October. Prosecutors are seeking sentences ranging from seven to 25 years for 12 separatist leaders on charges of rebellion, sedition and misappropriation of public funds.

The failed independence bid triggered Spain’s biggest political crisis in decades and while the crisis has been on the backburner recently, it still is a major factor in national politics. Many Spaniards reject Catalan separatism and judge their political parties accordingly.

The Supreme Court ruling is set to be a defining moment.

Joan Esculies, political analyst and history professor at the Open University of Catalonia, said the lower turnout might reflect apathy given the division among Catalan politicians but that bigger crowds could be expected after the court rules.

The centre-right Junts per Catalunya of former regional leader Carles Puigdemont has urged a hard line since the failed independence bid, while the left-wing Esquerra Republicana de Catalunya (ERC) is more open to dialogue with Madrid.

The annual Sept. 11 rally, known as the “Diada”, marks the anniversary of the fall of Barcelona to Spanish forces in 1714. Some of those present on Wednesday expressed exasperation with the divisions among the main separatist parties and doubts on when the region could break away from the rest of Spain.

“My objective is to reach independence for Catalonia. I know it’s difficult but I can’t give up. I don’t want to give up,” 55-year old Teresa Armengol said when asked why she was taking part in the rally.

But she said divisions between separatist parties were not helping, adding, “I hope they reach an agreement in the end … It seems the party is more important to them than the country (Catalonia)”.

Many protesters expressed support for the separatist leaders – nine of whom are in jail – awaiting the Supreme Court verdict.

“We’re very, very angry because nine of our politicians are in jail for letting us vote,” said 66-year old Montserrat Balaguer Selga, a retired nurse.

“What the state intends with this sentence is to behead a peaceful movement and, as it cannot detain two million citizens, it locks us up,” ERC leader Oriol Junqueras, 50, told Reuters in written answers from jail.