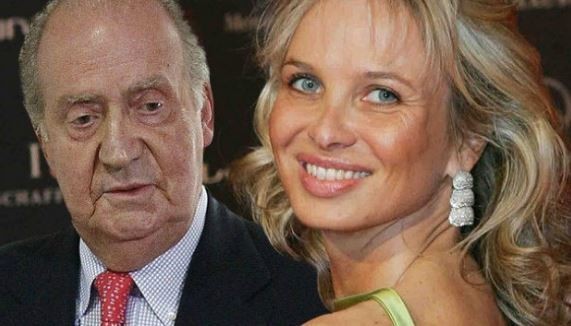 Spanish public prosecutors on Thursday questioned an ex-mistress of Spain’s former king Juan Carlos after she said the monarch pocketed money from a high-speed train contract with Saudi Arabia, her lawyers and Spanish judical sources said.

The scandal broke last year after Spanish media published recordings attributed to Corinna zu Sayn-Wittgenstein in which she alleged Juan Carlos collected a commission after a Spanish consortium was awarded a lucrative contract to build a high-speed rail network linking Mecca and Medina in Saudi Arabia.

The woman in the recordings was speaking in 2015 with a retired police chief who is currently in jail for alleged money laundering.

Sayn-Wittgenstein, who is divorced from the German prince whose surname she bears, has not denied that the voice in the recording is hers, but said she was the victim of a smear campaign.

She was questioned as a witness in London, where she has a home, as part of an investigation into the affair, according to her lawyers and Spanish judical sources.

“Even though she had no involvement in the (high-speed rail) deal, she was happy to volunteer the facts of which she was aware,” Sayn-Wittgenstein’s lawyer Robin Rathmell said in a statement.

“Serious allegations in the media regarding the financial dealings of the King Emeritus stretch back decades. Whether there is any real intent to investigate the (high-speed rail) deal and other allegatiosn properly in ultimately a matter for the Spanish judiciary and for Spain,” he added.

The Spanish public prosecutor’s office decided last year to investigate whether there was sufficient evidence to file a criminal complaint over the affair.

According to the Spanish judicial sources, the investigation focuses more on suspicions that Spanish firms that were part of the winning consortium paid bribes to win the contract, than on the actions of Juan Carlos, 81, who was Spain’s head of state at the time and therefore enjoyed immunity.

Sayn-Wittgenstein was named in the Spanish press as Juan Carlos’ mistress after she was discovered in his company when he was injured during a secret 2012 elephant hunting trip in Botswana.

The incident is widely seen as the beginning of the fall of Juan Carlos, who abdicated in 2014 at the age of 76 in favour of his son Felipe. He retired from public life in June.