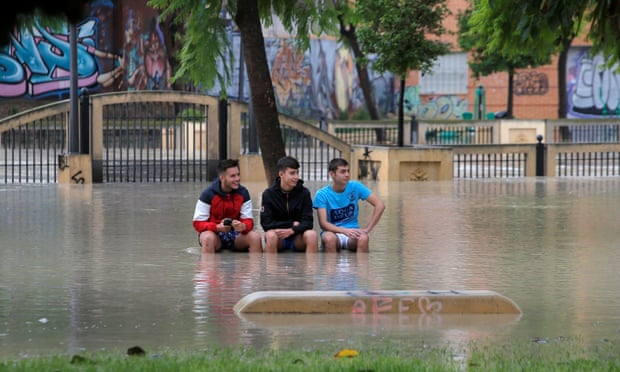 Almería and Murcia airports closed with many areas on high alert as downpours continue.

Police in Almería said a middle-aged man died in the early hours of Friday after his car became trapped in a tunnel that flooded in minutes.

The city’s mayor, Ramón Fernandez-Pacheco, told Cadena Ser radio that police officers managed to rescue two of the three people in the vehicle but one occupant remained inside.

Earlier a 51-year-old woman and her 61-year-old brother were found dead in an overturned car that floodwaters had washed away in Caudete, about 60 miles (100km) south of Valencia.

Spain’s acting prime minister, Pedro Sánchez, said the military emergency unit had been deployed and he sent his condolences to the families of the dead.

“A difficult and intense night,” he tweeted on Friday. “Some areas remain on alert amid torrential rains. Sadly we are mourning a third victim in Almería. All my love to the families of those who have died and to all those affected by the weather. Let’s step up the precautions.”

Almería and Murcia airports remained closed on Friday because of the heavy rains.

Spain’s meteorological office, Aemet, had forecast torrential downpours of up to 90mm (3.5in) an hour and up to 180mm over 24 hours. It issued red alerts on Friday for the Valencia region and Mallorca, while Almería, Murcia, Ibiza and Formentera were on orange alert.

But it added: “Be aware that small changes in the evolution of the isolated depression at high levels and low-level winds could also bring heavy rains to other areas.”

One of the first places to be hit was Ontinyent, a town south of Valencia, where the Clariano River flooded the streets on Wednesday night. Ontinyent’s mayor, Jorge Rodríguez, said the town had endured its heaviest rainfall on record, with more than 400mm by Thursday afternoon.

Muddy water rushed through streets, washing away cars, and almost reached the tops of the front doors of houses along the riverbank. Water also overflowed the Pantano de Almansa dam.

A similar weather front hit Madrid and parts of central Spain at the end of August, bringing violent storms, huge drifts of hail and 46.4 litres of rainfall per square metre in some areas.