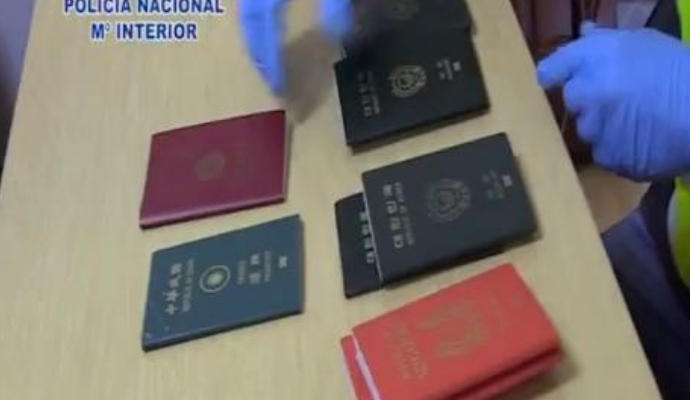 Spanish police have dismantled a people-smuggling gang which used airports in the Canaries, including Tenerife, to get Chinese migrants into the UK for 30,000 euros each.

The operation was based in Valencia where expert forgers drew up false documents and passports to use at the airports of Gran Canaria, Tenerife, Fuerteventura, Palma de Mallorca and Barcelona.
Three people have been arrested and so far, 40 victims have been identified, each paying the criminal group 30,000 euros.
“The investigation began when several of the victims reported a criminal organisa-tion that allegedly engaged in irregular immigration of Chi-nese citizens,” said a spokes-man for the Spanish police. “These citizens travelled from their country of origin to the United Kingdom or Ireland, making use of forged docu-ments of different nationalities of Asian countries and using European airports. “
The route most used was from China to Valencia where they were hidden in a house for several days waiting to continue their trip to the United Kingdom. Sometimes they were transferred to other Spanish airports with direct flights to the United Kingdom and Ireland to avoid suspicion.
“The 40 victims of Chinese nationality were captured in their country of origin,” said the spokesman. “Upon arrival in Spain, the organisation provid-ed them with accommodation until the falsified documen-tation for travel was prepared. For the entire trip (plane tickets, false documentation, accommodation and mainte-nance) they were charged 30,000 euros.”
The three ring-leaders arrested in Valencia were all Chinese. They face charges of belonging to a criminal orga-nisation, documentary falsi-fication and irregular immigra-tion.
Searches revealed 50 Asian passports of different nationa-lities (Japan, Taiwan, China, South Korea, Singapore, Macao and Hong Kong), 13 identity cards of the People’s Republic of China, two identity cards of South Korea, nine blank Nepal visa cards, 21 bank cards from different banking entities, 660 euros in cash, 3,698 yuan, several mobile phones, a tablet, a laptop, a printer and various supplies and material to forge documents.