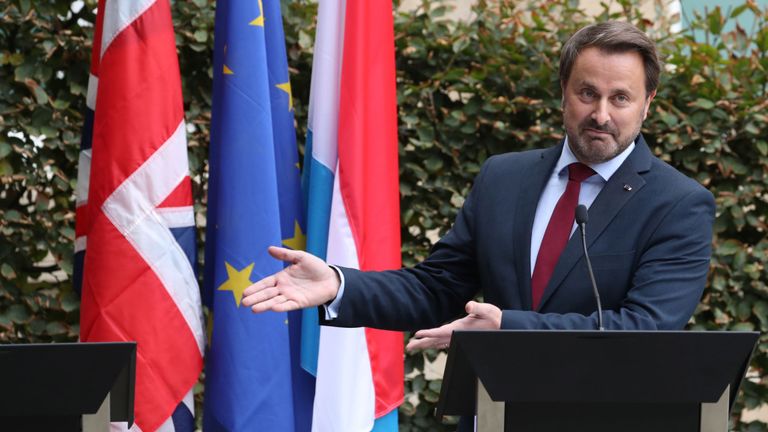 Boris Johnson pulled out of a joint event with the prime minister of Luxembourg due to loud anti-Brexit protests, leaving his counterpart to point to an empty podium.

Mr Bettel insisted the event go ahead as planned outside his ministry of state, despite the protesters’ loud chants, according to a UK government source.

He also accused Mr Johnson of not offering “any formal proposals” for a new Brexit deal and urged him: “Stop speaking, but act.”

Mr Juncker’s European Commission said “legally operational solutions” to break the deadlock had “not yet been made” by Britain.

Just hours earlier, Mr Johnson’s spokesman insisted he had “brought to the table a number of areas where workable solutions can be found”.

Downing Street said the talks went positively, and both leaders agreed to “intensify” talks so they would happen on a daily basis.

But Mr Johnson’s next event – a sit-down with Mr Bettel – threatened to blow up into a diplomatic row, when the UK prime minister pulled out of the news conference.

It was due to take place outdoors, where protesters shouting “stop Brexit” gathered to heckle the prime minister.

A UK government source told Sky News that Luxembourg “rejected an indoors conference due to technical issues that would have meant sound difficulties”.

Officials in Mr Bettel’s office said the request to move the news conference “came too late” and there was not “enough space” to hold it inside, adding: “We didn’t think the noise would be too bad. We tried to make the best of the situation.

“This was really not because of bad will.”

Mr Bettel went ahead with his speech and questions to the media, saying: “It’s on Mr Johnson – he holds the future of all UK citizens.”

Asked if the UK had presented any formal proposals for a renegotiated Brexit deal, Mr Bettel insisted the only agreement so far remained the one struck with Theresa May.

He said: “I have just one withdrawal agreement on the table and it’s the one from last year.

“There are no changes. There are no concrete proposals for the moment on the table and I won’t give an agreement to ideas, we need written proposals. So stop speaking, but act.”

Mr Johnson then spoke to a UK broadcaster inside, and said he didn’t “think it would have been fair to the PM of Luxembourg”.

He said: “I think there was clearly a lot of noise and our points might have been drowned out but I’m happy to talk to you now.”

The prime minister added it was a “difficult moment” in the Brexit process and that people should not think a deal is “necessarily in the bag”, but that “there’ll be hard work to be done”.

Number 10 is yet to spell out how Mr Johnson plans not to ask the EU to delay Brexit to avoid no-deal without breaking the law.

Opposition MPs passed a bill earlier this month forcing Mr Johnson to ask Brussels for a delay if he has not passed a deal in parliament by 19 October.

The government has not explained how it will get round the legislation, but Foreign Secretary Dominic Raab has said it will “test” the law to the “limit”.

He dismissed criticism about the lack of detail made public on proposals being made to the EU.

The matter is expected to end up in the Supreme Court starting on Tuesday.