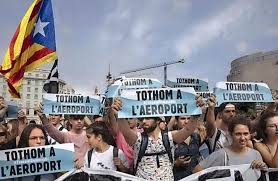 Catalonia faced another day of disruption yesterday, as protests over the Supreme Court ruling against pro-independence leaders continued.

Grassroots organization ANC called for people to assemble outside the central government’s offices in Catalan provincial capitals and protestors blocked motorways such as the AP-7 in the province of Girona.

There were also more police charges against demonstrators in a bid to unblock roads in the region and at El Prat airport, 108 flights were cancelled stranding hundreds of travellers as a result of the demonstrations in which 75 people were treated for injuries.

The Catalan government said one man lost an eye during the protests at the airport on Monday, most likely from a rubber bullet fired by National Police or a foam bullet used by the Mossos d’Esquadra.

There is also television footage showing a woman waving a Spanish flag before a young man grabbed it and struck her, knocking her to the ground.