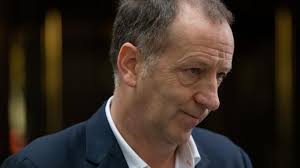 A public row has broken out at the top of the People’s Vote campaign for another EU referendum.

Mr Baldwin said he had been fired by Mr Rudd – but would be going in to work as normal.

Mr Rudd denied firing Mr Baldwin, saying “he has an opportunity for a different type of role”.

He also denied reports of strategic differences within the organisation over his desire to openly campaign for Remain.

On Sunday, the Observer reported others within the group want to concentrate on winning support for another vote among Leave voters and wavering Labour and Tory MPs.

But Mr Rudd told BBC Radio 4’s Today programme: “There’s no row about the Remain side and PV [People’s Vote]. Everyone knows where we stand on this”.

“This is an absurd argument. Everybody knows perfectly well that we’re made up of people who want to vote to Remain. There isn’t a problem”.

The campaign is supported by five groups – the European Movement UK, the Joint Media Unit, Our Future Our Choice, For our Future’s Sake and Wales for Europe and Open Britain – of which Mr Rudd is chair.

Over the weekend, the Financial Times reported that two senior figures of the campaign – Mr Baldwin, the former top adviser to Ed Miliband when he was Labour leader, and James McGrory, ex-deputy PM Nick Clegg’s former top adviser – had been asked to leave by Mr Rudd.

Mr Baldwin told the Today programme that although Mr Rudd “technically controls my contract, he didn’t appoint me, he doesn’t pay me” and added he was still planning to go into work.

He added it was “extraordinary that Roland Rudd is acting like this is his campaign”.

“He is making the mistake a lot of businessmen do when they dabble in politics, which is to think, because they have a certain title and board they own the campaign,” he said.

He also accused the Liberal Democrats of “playing some strange games” with the campaign, referring to their bid to have an election on 9 December.

Mr Rudd, who made his fortune as the founder of a financial PR firm, said “there is a problem when someone comes on this show and says the Lib Dems are no longer part of the People’s Vote”.

“The key thing now is that we have to keep our eyes set on the prize.

“We have every chance of getting that prize which is to get it back to the people – the more people see this deal the more they see its flaws.”

Asked if he had fired Mr Baldwin, Mr Rudd responded that “he has an opportunity for a different type of role”.

The BBC has been told that both Mr Baldwin and Mr McGrory were at the People’s Vote offices on Monday morning, as their 40 staff gathered for a meeting.

Tweeting in support of Mr Baldwin, People’s Vote campaigner and ex-adviser to Tony Blair Alastair Campbell said “after his [Mr Rudd’s] rare visit to the building today it is to be hoped those actually working for a second referendum rather than talking about it to their business pals (none of whom have made donations for months) can get on with their jobs and put this silly episode behind us”.