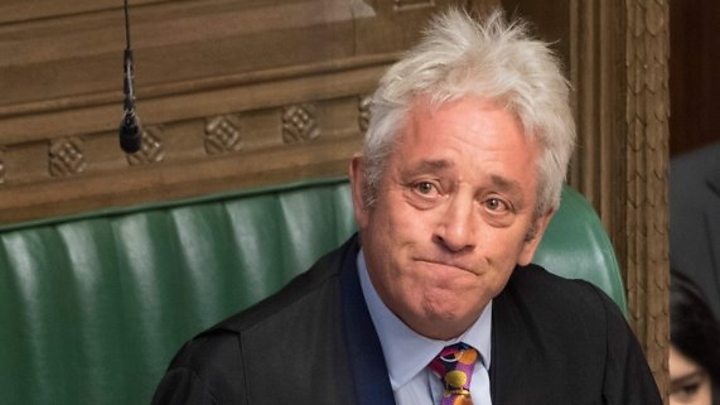 MPs are voting between the final two candidates to succeed John Bercow as Speaker, in what is the first election for the post in more than a decade.

In the third round of voting Sir Lindsay Hoyle received the most votes at 267, followed by Chris Bryant with 169 and Dame Eleanor Laing was eliminated with 127.

The Speaker keeps order in Commons debates and calls MPs to speak.

The result of the final ballot is expected about 20:00 GMT.

Seven candidates were originally in the running.

Having received the least number of votes, Dame Rosie Winterton had to leave the contest in the second round of voting and Harriet Harman voluntarily withdrew her candidacy.

Labour MP Meg Hillier and Conservative Sir Edward Leigh were knocked out in the first round of the contest after receiving 10 and 11 votes respectively.

Mr Bercow stood down last week after an eventful and frequently controversial decade in the Speaker’s chair. His resignation as MP for Buckingham was officially confirmed on Monday.

What were the candidates’ pitches?

The first to speak was Labour’s Dame Rosie Winterton. She said the Speaker’s job was “not to dominate proceedings or speak for Parliament”, and promised to “douse the flames not pour petrol on them”.

Another Labour MP Chris Bryant said he believed in “a Speaker who will stand by the rules, who is completely impartial and who knows Erskine May [the parliamentary rule book] back to front”, adding: “I’ve got it lying by my bedside.”

He also pledged to end clapping in the chamber and “sort out the wi-fi” – pledges that were themselves met with clapping from those listening.

Conservative Sir Edward Leigh said a Speaker should “submerge their character in the job” and be “a quiet voice”.

He also said the preservation of parliamentary buildings should be done “in the interests of our paymaster – the taxpayers”. “We cannot waste billions of pounds,” he said.

Current deputy Speaker Eleanor Laing expressed sadness at the number of MPs deciding not to run again at the December election and vowed to stand up for all members if selected for the job.

She said Parliament needed to “escape from the hierarchical structures that allow bullying to take root”.

Also addressing the subject of bullying, Labour’s Meg Hillier said MPs needed to protect staff in the House, warning bullying “will become the next expenses scandal”.

Mr Bercow was criticised for not doing more to tackle allegations of bullying and harassment in the Commons, and was himself accused of mistreating several members of staff, which he denied.

Another current deputy Speaker, Sir Lindsay Hoyle, said he had introduced security measures for MPs “so we can feel safe”.

“I will not let you down,” he promised MPs.

Former deputy leader of the Labour Party Harriet Harman was last to make her pitch, promising to take on a fourth deputy drawn from one of the smaller parties.

She said she had “an unparallel record of reform”, pointing to her campaign to allow pregnant MPs and new parents to vote by proxy.

The candidates made their pitches under the gaze of former Speaker Betty Boothroyd. Labour MP Stella Creasy got a picture of the baroness sitting in the gallery.

How will the vote unfold?

Candidates needed the support of at least 12 MPs, three of whom have to be from a different party, in order to be eligible to take part.

MPs have 20 minutes to vote in a secret ballot. It will take about 45 minutes to count them.

If no candidate receives more half of the votes, the individual who receives the least votes will drop out, as will anyone who obtains less than 5% of the total cast.

After each round, there will be a 10-minute period for candidates to withdraw.

MPs will then continue to vote until one candidate obtains more than half of the votes. The process is being overseen by Ken Clarke, who as Father of the House is the long-serving MP in the Commons.

Who was in the running?

The seven contenders at the start of the race were:

BBC parliamentary correspondent Mark D’Arcy said most observers believed Sir Lindsay – who has been Mr Bercow’s senior deputy for years – was the frontrunner.

“As Chairman of Ways and Means, he chairs Budget debates and selects amendments for committee stage proceedings on bills, and has had plenty of opportunity to demonstrate his credentials,” our correspondent says.

He received an early boost when former Conservative minister Shailesh Vara, one of the outsiders in the contest, said he was pulling out and would be voting for his Labour colleague.

What is the Speaker’s role?

The role of the Speaker has come under increasing scrutiny over the past few years – and Mr Bercow has been both praised for boosting the influence of backbench MPs and criticised for stretching parliamentary rules.

Some have also accused him of not being impartial when it comes to Brexit.

The Speaker is responsible for choosing which amendments can be voted on – a power that has proved particularly significant in the Brexit process.

He is also in charge of upholding parliamentary rules, and Mr Bercow twice angered some MPs by refusing to allow the government to hold another vote on an already rejected Brexit deal.

The Speaker can also permit MPs to ask urgent questions whereby government ministers are summoned to the House of Commons over a time-sensitive or important matter.

During his years in the role, Mr Bercow dramatically increased the number of urgent questions asked.