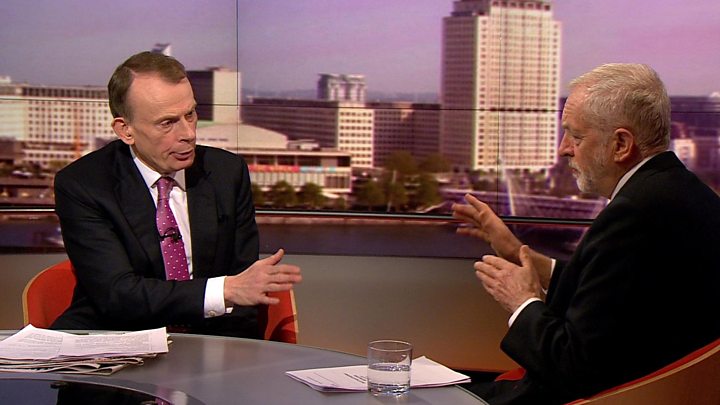 A Labour government would “certainly not” allow a Scottish independence vote until after the next Holyrood election in 2021, the party’s leader has said.

Jeremy Corbyn told the BBC’s Andrew Marr he would not support SNP calls for indyref2 ahead of the Scottish Parliament election.

The SNP want a referendum on Scottish independence in 2020.

The party has said it will not help Mr Corbyn into power unless he accepts the “principle” of a second referendum.

Both the Conservatives and Liberal Democrats have said they would block a second independence vote.

Mr Corbyn was asked to clarify his position amid speculation it could become a key bargaining point in the event of a hung parliament.

During his recent visit to Scotland he initially said he would not back an independence vote in the “first term” of a Labour government but later clarified the remark, saying it was not a priority in the “early years”.

Mr Corbyn told Andrew Marr he wanted to win the election and “start the process of reinvesting in this country”, which he said would mean Scotland getting £70bn of investment.

“I do not want us to spend the first year on an independence referendum”, he added.

The Labour leader continued: “I say gently to the SNP they will have the opportunity with a Labour government in Westminster of seeing a fair allocation of resources to Scotland, they will see an investment in Scotland that will help deal with the massive health and social inequalities they’ve got.”

Asked whether he would allow another vote on independence in the first term of a Labour government, his response was: “There are Scottish [Parliament] elections in 2021… up until then, certainly not.”

The next Holyrood election is due to be held on 6 May 2021, although the date of the poll can be varied up to one month either way by the monarch on the proposal of the presiding officer.

Mr Corbyn was also questioned on whether a Labour government would need the support of SNP MPs through a confidence and supply arrangement. He replied: “We’re not doing deals with anybody. We’re not forming coalition governments.”

The SNP’s Westminster leader Ian Blackford had earlier said a “move towards independence is unstoppable, it will not change whether there is a Corbyn or a Johnson government in London”.

He argued that to refuse Scotland the power to hold another independence referendum would be undemocratic if the SNP wins the most Scottish seats on 12 December.

He said the SNP were “wanting to lock the Tories out of office” to prevent the UK leaving the European Union, in addition to fighting for a second independence referendum.

“Our priorities, principally, in this election is about making sure we can escape Brexit – that’s the first thing – but also securing Scotland’s right to choose its own future,” Mr Blackford said.

‘Once in a generation’

Warning the Tories and Labour to not block another independence vote, he added that if the SNP wins a majority of Scottish seats on a commitment to hold another vote, “it will ill-behold any prime minister to stand in the face of democracy and the right of Scots to choose.”

Boris Johnson has insisted he would block another independence vote, claiming the issue was settled in a “once in a generation” vote in 2014.

On Saturday, Scottish Conservative interim leader Jackson Carlaw said during a speech that “rocks will melt with the sun” before the party supports another indyref vote.

The Liberal Democrats also oppose a second referendum on independence, with the party leader Jo Swinson recently describing it as the “last thing we need” and saying it would lead to further “chaos”.