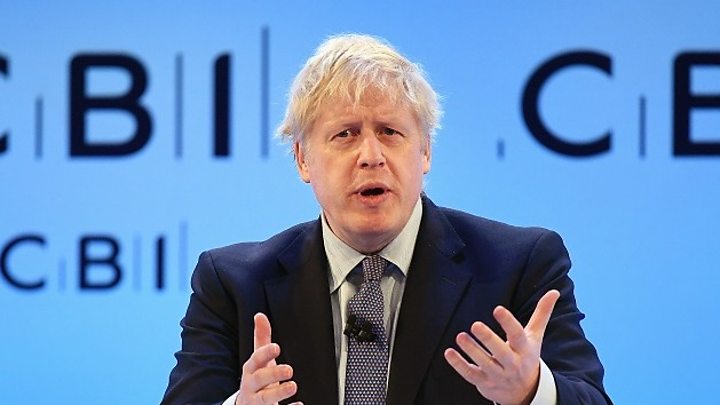 Planned cuts to corporation tax next April are to be put on hold, Boris Johnson has said, with the money being spent on the NHS and other services.

But the PM told business leaders it may cost the Treasury £6bn and this was better spent on “national priorities”, including the health service.

Labour said business “handouts” had done real damage and the Tories would “revert to type” after the election.

The announcement does not mean any new money for the NHS, on top of the £20bn extra a year the Conservatives are promising to give it up to 2023. The BBC understands the cash will be used, in part, to fund existing pledges on GP training.

With just over three weeks to go before the 12 December election, the leaders of the three largest parties in England have been parading their business credentials at the CBI conference.

Jeremy Corbyn said business had “so much to gain” from a Labour victory in terms of investment while Jo Swinson said the Liberal Democrats were the “natural party of business” because they wanted to cancel Brexit.

Addressing the audience of top executives and entrepreneurs, Mr Johnson said they had “created the wealth that actually pays for the NHS”.

Stressing his party’s “emphatic belief in fiscal prudence”, he said he had decided against going ahead with a further cut in corporation tax, a step first proposed by Chancellor George Osborne in 2016 to boost business in the wake of the Brexit referendum.

Mr Johnson said the UK already had the lowest rate of corporation tax of “any major economy” and further cuts would be “postponed”.

“Before you storm the stage, let me remind you that this saves £6bn that we can put into the priorities of the British people including the NHS,” he told the audience.

Corporation tax is an important revenue-raiser, making up approximately 9% of the UK government’s total tax take. The amount raised by the tax has risen by two-thirds in the past decade, as the rate has fallen from 28% to 19% and economic conditions have improved.

But many economists said the latest cut would be potentially counter-productive in terms of tax yields, with a study based on HMRC data last year suggesting it could mean £6bn a year in lost government revenues.

In response, CBI director Carolyn Fairbairn said the move could “work for the country if it is backed by further efforts to the costs of doing business and promote growth”.

Blink and you might have missed it, but the PM has just announced the single biggest tax-raising measure of the campaign so far.

The overnight headlines about Boris Johnson’s CBI speech were about a £1bn cut to business taxes. It pays to read the small print.

All together, this leaves an extra £5bn a year for the Conservative manifesto to deploy in extra spending or, as seems likely, some crowd-pleasing pre-election personal tax cuts.

I’m told the corporation tax move was Chancellor Sajid Javid’s idea, and was discussed during plans for his aborted Budget earlier this month. The PM also confirmed Mr Javid would remain in post if he wins the election next month.

Cancelling the cut still leaves the UK with the lowest corporation tax rate in the G20, although not as low as Switzerland or Singapore.

Given the government’s argument has long been that cuts to corporation tax raise revenue, it is interesting to see the PM now say that cancelling cuts will also raise revenue.

It is meant to show clear blue water between the Conservatives and Labour on fiscal credibility. In the event, there was barely a squeak out of the CBI audience about a significant multi-billion pound tax change.

Labour’s plan has been to raise corporation tax to 26% – the 2011 level – which it says will generate billions to be spent on its priorities, including health and education.

Turning to Brexit, the Conservative leader told the conference that while big business did not want the UK to leave the EU, his withdrawal deal would provide the certainty “that you want now and have wanted for some time”.

If elected with a Commons majority, Mr Johnson is hoping to get the agreement on the terms of the UK’s exit into law by 31 January, and begin talks with Brussels on a permanent trading relationship.

He also announced a review of business rates in England, with the aim of reducing the overall burden of the tax, as well as a cut in National Insurance contributions for employers, which already benefit from a reduction known as the employment allowance.

In his address, Mr Corbyn said business had nothing to fear from a Labour government, arguing that while the richest would pay more, there would also be “more investment than you have ever dreamt of”.

He said he would “make no apologies” for the party’s plan to take rail, mail, water and broadband delivery into public ownership, saying it was “not an attack” on the free market and would bring the UK in line with the continent.

“It is not anti-business to want prosperity in every part of the country.”

The Labour leader also set out plans to train about 320,000 apprentices in jobs such as construction, manufacturing and design within the renewable energy, transport and forestry sectors.

In her first address to the CBI as leader of her party, Ms Swinson said no-one claiming to want to “get Brexit sorted” was on the side of business, due to the negative impact she said it would have on investment and access to labour.

“With Boris Johnson in the pocket of Nigel Farage and Jeremy Corbyn stuck in the 1970s, we are the only one standing up for you,” she said.

She said her party would go further than the others and replace “crippling” business rates with a levy paid by commercial landlords based on land value, which she suggested would help “rescue the High Street”.

Brexit Party leader Nigel Farage, who is not attending the CBI event, said politicians’ focus should be on helping small business and promoting what he claimed were the advantages of a no-deal Brexit.