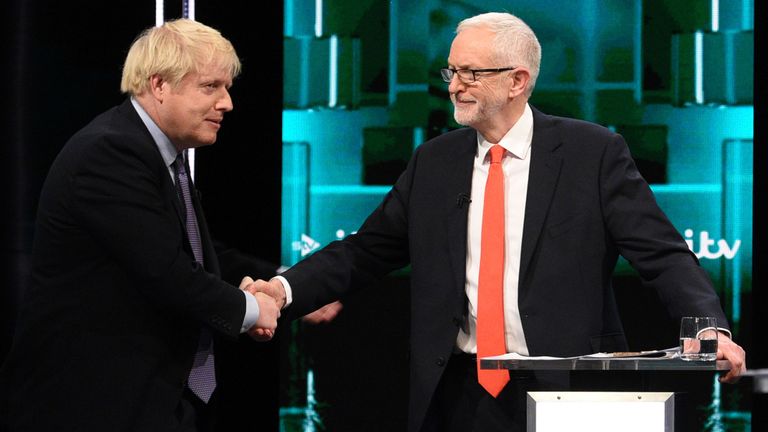 Boris Johnson has accused Jeremy Corbyn of discovering a “magic money forest” to pay for his campaign promises, as the Labour leader vowed to end austerity if he wins a “once-in-a-generation election”.

Facing off at the first TV debate of the election campaign, the pair were pressed on their numerous spending promises.

When it was put to him that his predecessor Theresa May had told voters two years ago that there was no “magic money tree”, the prime minister delivered his jibe at the Labour leader.

Mr Johnson said he believed in “investing massively in our public services” in order to support a “dynamic wealth-creating sector”.

Mr Corbyn said Labour would “end austerity” because it had been “so brutal on the lives of so many people”.

The pair also clashed over the NHS and Brexit during what was at times an ill-tempered contest.

A YouGov/Sky News snap poll after the one-hour debate found that 51% of those surveyed thought Mr Johnson won, while 49% thought Mr Corbyn was the better performer.

One of the dominant issues in the campaign so far has been the NHS – and its potential role in future trade talks with the US after Brexit.

The prime minister said the Labour leader’s claim that the health service would be on the table in such negotiations was an “absolute invention” and “completely untrue”.

Mr Corbyn accused Mr Johnson of conducting “secret meetings” with Washington about the NHS and a future trade deal – and produced heavily redacted papers to suggest the government was not being open with the public.The Labour leader said: “What we know of what Mr Johnson has done is a series of secret meetings with the United States in which they were proposing to open up our NHS markets, as they call them, to American companies.”

Responding, Mr Johnson said: “This is an absolute invention. It is completely untrue.

“There are no circumstances whatever in which this government or any Conservative government will put the NHS on the table in any trade negotiation.”

A dominant feature of the early exchanges was the issue of Britain’s EU exit.

Mr Johnson made clear that he believed Britain’s future relationship with the EU could be sorted out by the end of 2020 – and warned of more “dither and delay” under Labour.

Mr Corbyn, meanwhile, said the PM’s claim that he could “get Brexit done” by the end of January was “nonsense”.”What he is proposing is a trade deal which will take at least seven years to negotiate whilst at the same time saying he will negotiate a special trade deal with the European Union.

“The two things are actually incompatible.”

The Labour leader said it was “nonsense” for the PM to suggest that there would be a coalition between him and the SNP, adding that “there would be no support for a Scottish referendum in the early years of the next Labour government”.

One of the audience questions was about the “nastiness in politics” that has been seen recently.

The two leaders were asked by host Julie Etchingham to “make a gesture” towards one another, prompting the pair to shake hands.

Asked if the truth mattered in the election, Mr Johnson said “I think it does”, a remark that prompted laughter in the audience.

But laughter could also be heard from some in the audience as Mr Corbyn sought to explain his Brexit position.

One of the features of the debate was a quick-fire round of questions, during which the subject of the Royal Family came up.

Asked if the monarchy was fit for purpose, Mr Corbyn replied: “Needs a bit of improvement.”

The PM said the “institution of the monarchy is beyond reproach”.

Asked if Prince Andrew was fit for purpose, in light of recent headlines surrounding his links to convicted sex offender Jeffrey Epstein, Mr Corbyn said: “Before we discuss Prince Andrew I think we should discuss the victims that are there because of what [Jeffrey] Epstein was doing.

“I think there are very, very serious questions that must be answered and nobody should be above the law, but the primary position ought to be the proper treatment of those people who were victims of the most appalling behaviour by apparently Epstein and many others.”

Mr Johnson said “all our sympathies” should be with the victims of Epstein, adding: “The law must certainly take its course.”

The PM ended by claiming that Mr Corbyn had been unable to answer “fundamental questions” on Brexit and whether he would grant a second Scottish independence referendum.

“If he can’t answer those questions tonight, I don’t think he’s fit to lead our country.”

Mr Corbyn said a vote for Labour was a “vote for hope”.

“This is a once-in-a-generation election to end privatisation and give the National Health Service the funding it needs. To give people the final say and get Brexit sorted,” he said.

“To tackle the climate emergency that threatens our futures. To invest good jobs in every region and nation of our country.”

After the debate, leaders of the UK’s other political parties were interviewed individually.

During a quickfire round of questions Lib Dem leader Jo Swinson quickly answered “yes” to whether she would use a nuclear weapon or not.

SNP leader Nicola Sturgeon said she would not like to be part of a Labour coalition but would work with the party to ensure the Conservative Party did not get a majority.

She also said Scotland is “one of the most wealthy countries on the face of the planet” and if it was just free of the rest of the UK it would thrive within the EU – but she would not drop the pound for the euro.

Brexit Party leader Nigel Farage said he does not regret not standing as a candidate in this election – and the UK could benefit from £200bn over the next five years by getting rid of HS2 and not being in the EU.

He could not give an example of anything he does to personally help the environment. He said he drives all over the country and flies a lot – but does think a global tree planting initiative should be started.

Green Party co-leader Sian Berry said she was outraged by other parties changing their climate targets as it is scientific fact we only have until 2030 to get the country carbon neutral.

She said she would also raise the living wage to £12.