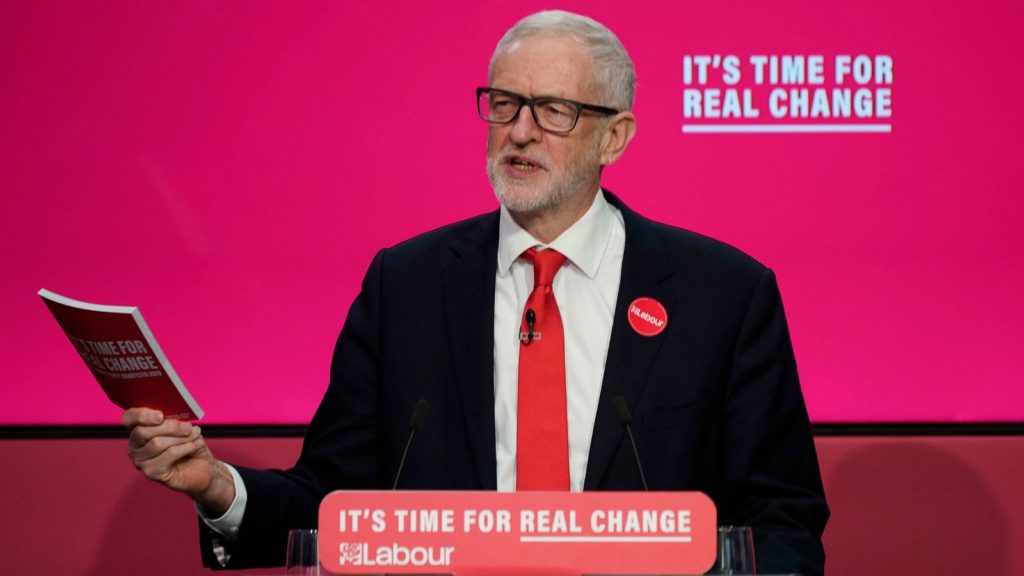 Jeremy Corbyn has pledged to increase public sector pay by 5% if Labour wins the election.

The party’s “radical” manifesto, launched in Birmingham today, says all public sector workers would get a pay rise of 5% – an average of £1,643 – from April 2020.

After 2020, Labour promised to deliver “year-on-year above-inflation pay rises…to reward and retain the people who do so much for us all”.

Labour said the 105-page manifesto was fully costed, as was the Liberal Democrats’ manifesto launched on Wednesday.

Labour says it would raise an additional £82.9bn through a variety of taxes, including increasing income tax for those earning more than £80,000, raising corporation tax and extending stamp duty reserve tax for financial transactions.

Mr Corbyn told supporters at the manifesto launch “Labour is on your side”, as he said the “attacks” from the rich and powerful prove Labour is “for the many not the few”.

He said: “The billionaires and the super rich, the tax dodgers, the bad bosses and the big polluters – they own the Conservative Party.

Other pledges listed in the manifesto included:

: Raise corporation tax to 26% from April 2022 (from the current 19%)
:: Upgrade almost all homes to highest energy efficiency standards
:: Living wage of at least £10 an hour for workers aged 16 or over
:: Cut working week to 32 hours (four days) within a decade
:: Ban zero-hour contracts
:: Creating a national education service for life-long learning
:: Getting Brexit “sorted” within six months and having a second referendum
:: Freedom of movement would continue if Remain won but restrictions would be imposed if Leave won
:: Constructing up to 150,000 homes a year

Labour said it will introduce a “windfall tax” on oil companies to help cover costs of renewable energy, but did not say what the tax would be.

Boris Johnson said the manifesto had no “economic credibility” and this was Mr Corbyn’s moment to shine but he “completely misses his cue”.

“Because what we want to know is what is his plan to deliver Brexit and what’s the deal he wants to do – and which side would he vote on that deal and we still don’t know,” the prime minister said.

“Until we have answers to those questions, until we get Brexit done, none of this carries any economic credibility whatever.”

The Confederation of British Industry (CBI) was damning about Labour’s plan, saying state control “will drag our economy down, rather than lift people up”.

Carolyn Fairburn, CBI director general, said: “It’s the most vulnerable in society who will pay the price for this economic experiment.

She added that the CBI shares Labour’s goals for a closer trading relationship with Europe and a greener and more inclusive economy, and supports Labour’s plan to build more affordable homes, have more apprenticeships and reform business rates.

But, she said without business investment and insight “it won’t be possible to drive the economy forward or improve vital public services”.

Home Office minister Brandon Lewis said the manifesto showed Mr Corbyn had no plan for Brexit and would cost each taxpayer £2,400 a year.

The manifesto might run to 105 pages, and the costing document to 40 more, but the clear message Jeremy Corbyn wanted to get across was boiled down to a five word phrase: “Labour is on your side”.

He argued the Conservatives were ‘owned’ by the very same ‘vested interests’ that a Labour government was intent on challenging through their radical manifesto.

It is becoming increasingly clear that Labour believe the way to get beyond the issue of Brexit is to recast the result of the referendum of 2016 as a howl of outrage demanding fundamental change.

Behind the ‘Campaign for real change’ tagline is an implicit argument that the changes a Labour government would bring through its £82 billion plan would be bigger than Brexit.”