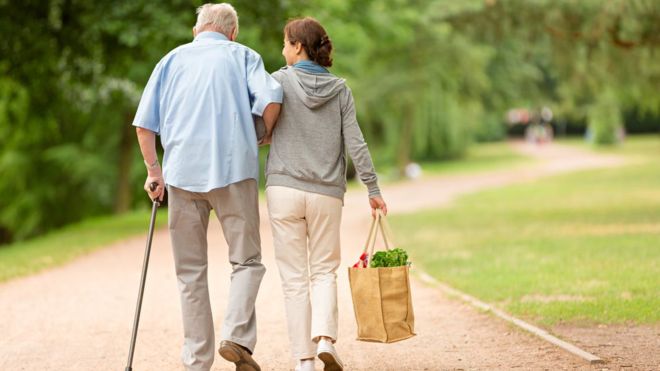 The Conservatives have pledged an extra £1bn per year for social care in England over the next five years, if they win the election.

The government had already promised an extra £1bn next year, but this extends the pledge until 2024/25.

He wrote that social care was “too important to be politicised,” and parties should work on new proposals “as soon as possible” after the election.

Chancellor Sajid Javid told BBC Radio 4’s Today programme it was “no good for anyone” if the issue “turns into some kind of political football”.

At the last election in 2017, former prime minister Theresa May decided to drop her plans to change the system after a backlash.

After proposals to make people receiving care at home liable for the full costs if they are worth at least £100,000 proved controversial, Mrs May announced there would be an “absolute limit” on the money people would have to pay.

The plans were eventually abandoned after the Conservatives failed to win an overall majority.

In his Mail article, Mr Hancock pledged that the Tories would work with other parties to decide reforms that “command the widest possible support”.

“Both main parties have seen what happens to bold and complex social care reform plans unveiled in the heat of a hyper-partisan election campaign,” he said.

However, he added that it would be a “red line” for his party that “no one needing care will have to sell their home to pay for it”.

One of the first things Boris Johnson said when he became prime minister, standing on the steps of Downing Street, was that he would fix the social care crisis.

These proposals – if they end up being the sum of the Tory social care policy when their manifesto is eventually released – do not set out a roadmap to that. They are little more than a promise to do something.

Even the extra money falls short of what the Local Government Association claims is needed to stand still.

Perhaps it should not surprise. At the last election, Theresa May was forced to backtrack on her social care plans within days.

Why? Tackling the issue will take money. A lot of it. And that in all likelihood means introducing some kind of levy or tax on people.

Currently just one in five older people who need help get it from the state.

Speaking on Today, shadow education secretary Angela Rayner did not say whether Labour would work with the Tories on the issue.

“The Conservatives can work with us when we have a Labour government,” she added.

Labour is promising free personal care in England for over-65s most in need of it, so they will not have to pay for help with dressing, washing and meals.

The party says the pledge, costing an estimated £6bn a year, will double the number of those not having to pay.

Currently, state help with the cost of home or residential help is available for those with assets below £23,250.

This would bring England into line with Scotland, where free at-home care for the most vulnerable over-65s was introduced in 2001.

The Green Party has made the same pledge, promising to spend an extra £4.5bn a year to equalise the two systems.

The SNP has promised to scrap non-residential social care charges for all if it wins the Scottish Parliament election in 2021.

The Liberal Democrats are proposing to spend an extra £7bn a year on the NHS and social care services, funded by raising income tax rates by 1%.

They would also hold a cross-party “convention” on health and social care, with care workers and patients’ groups invited to take part.