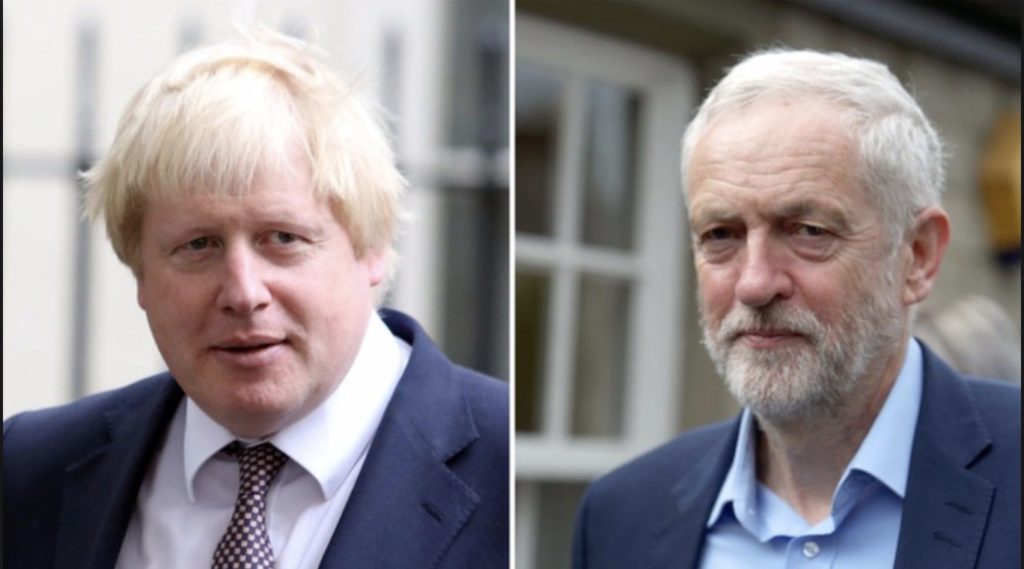 A row has broken out after Labour leader Jeremy Corbyn claimed he had “proof” the NHS was at risk under a post-Brexit trade deal with the US.

Mr Corbyn said he had a 451-page dossier showing initial talks had taken place, proving the NHS was “for sale”.

But Prime Minister Boris Johnson said the claims were “nonsense” and the NHS would not be part of trade talks.

The Tory manifesto explicitly states neither the price paid for drugs nor NHS services will be “on the table”.

Meanwhile the SNP has published its manifesto which includes a pledge to “stop the NHS becoming a lever in any international trade deal” through its NHS Protection Act.

And other parties have criticised the Tories, including Liberal Democrat shadow Brexit secretary Tom Brake, who said the public would be “horrified by what looks like a deal cooked up between the Tories and Donald Trump that puts our NHS on the table”.

Former Green Party leader Caroline Lucas said the Conservative Party “can no longer claim the NHS is not for sale”, adding: “Under their watch, it is.”

Mark Dayan, policy analyst and the head of public affairs at the Nuffield Trust think tank said the NHS was not being “flogged off” in the sense that US companies will not own hospitals.

But he said the documents suggest the US is trying various tactics to get the NHS to pay more money to their pharmaceutical companies for the drugs that they sell.

“Obviously from the NHS’s point of view, that is a concern… you’re really losing out in that situation,” he said.

Mr Dayan said if talks with the US continue, UK negotiators must “push hard for the interests of the UK and the NHS”.

What evidence has Labour obtained?

Labour obtained uncensored government documents covering six rounds of talks between US and UK officials in Washington and London between July 2017 and July 2019.

They are all preparatory meetings ahead of formal trade talks.

They show the US is interested in discussing drug pricing – mainly, extending patents that stop cheaper generic medicines being used.

One document quotes a UK official saying the talks are helpful in determining the areas the US may want to discuss, while acknowledging the UK would have objections.

As well as the pharmaceutical industry, the talks also covered other areas including agriculture and climate change. The UK team inquired about including a reference to climate change in any US-UK trade deal, something the US side said was not allowed by Congress.

The document also refers to the US policy of making “total market access” a starting point in any trade talks – but says it is up to other countries to specify anything they want to be excluded from talks.

There is no indication in the documents that the UK team agreed to anything in the talks.

Is this proof the NHS is up for sale?

Jeremy Corbyn doesn’t provide evidence ministers have agreed the health service should be part of a trade deal with US.

But details of discussions about the demands of US pharmaceutical companies will still be motivating for Labour voters worried about the NHS.

“Not for sale,” has been the biggest mantra at Labour events, even though the Tories have always furiously denied the NHS is in any way “up for sale”.

It’s clear US drug companies want access to UK markets – Labour suggests the UK has agreed they could extend the patents on some medicines, which could cost the NHS more, for example.

But whether any UK government would ever do a deal that made medicines much more expensive for the NHS, and therefore the taxpayer, which would be massively costly for the government and probably prove deeply unpopular, is a big political question.

The Conservative manifesto says the NHS will not be on the table in post-Brexit trade talks.

Currently, the NHS is able to use its bargaining power as a centralised health system to negotiate low prices for drugs.

It also has a strong track record in resisting attempts to lengthen patents on drugs, to allow cheaper generics to be used more quickly than they are in the US.

The US currently pays two and a half times more for drugs than the NHS does.

Meanwhile, about 7% of the NHS budget in England goes on private companies that provide NHS services, mainly non-emergency treatments such as knee and hip replacements and some community services.

And Labour has warned this market could be extended further under the Tories.

What is the row about?

Mr Corbyn said the documents showed talks were at a “very advanced stage” and gave the lie to Boris Johnson’s claims the NHS would not be part of any trade talks.

“We have now got evidence that under Boris Johnson the NHS is on the table and will be up for sale.

“He tried to cover it up in a secret agenda and today it has been exposed.”

“Jeremy Corbyn is getting desperate and is out and out lying about what the documents contain.

“People should not believe what he says.”

“This is continually brought up by the Labour Party as a diversionary tactic from the difficulties they are encountering,” he said.

And he could give an “absolute cast iron guarantee” the NHS would not be on the table.

He also pointed out the documents had been available online for two months.