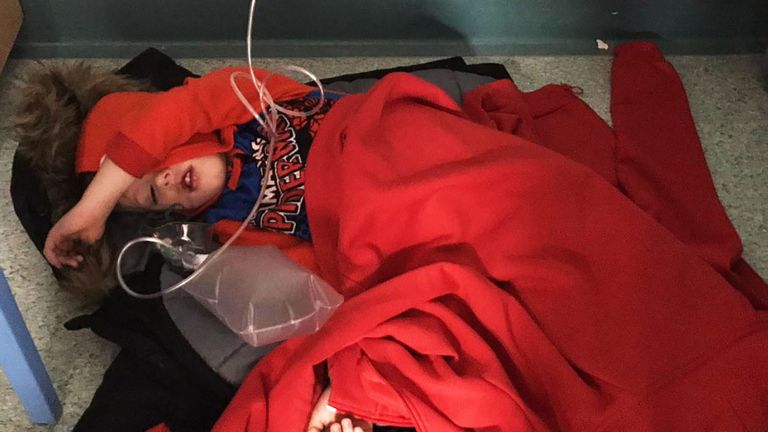 Boris Johnson has been criticised after initially refusing to look at a picture of a sick four-year-old boy who had to sleep on the floor of a Leeds hospital.

The picture in the Daily Mirror of Jack, who had suspected pneumonia, spurred complaints about NHS cuts.

An ITV reporter tried to show Mr Johnson the picture on his phone, but he refused to look, before taking the device and putting it in his pocket.

He later looked and returned the phone.

Mr Johnson was asked by other reporters why he had not looked at the photo, but he did not answer the question directly, instead repeating Conservative pledges for the NHS and promising to rebuild “the whole of Leeds General Infirmary from top to bottom”.

Health Secretary Matt Hancock later visited the hospital to speak to management about the case.

He said he was “horrified” by the incident involving Jack, adding: “It’s not good enough and I have apologised.”

But Mr Hancock would not comment on the PM’s reaction, saying: “What people care about is what are we doing to improve care at Leeds General and across the NHS.”

As he left, the health secretary was met by a group of protesters shouting at him.

The boy’s mother has said she does not want her son’s treatment being used as a “political football”.

In a formal complaint to press regulator IPSO, she said she had initially given permission to two newspapers to use her son Jack’s image but – after the story was widely reported across other news outlets – she now wanted to prevent any further publication of the picture or his details.

In her letter, she said the actions of the media were “causing significant distress” to Jack and his family.

Jack was taken into Leeds General Infirmary last week after being ill for six days, his mother told the Mirror.

His mother said he had been seen as soon as he arrived and given a bed and oxygen, but a few hours later the bed had to be given to another patient and Jack was left without one for more than four hours.

His mother said she then made a makeshift bed for her son with coats and took the picture.

She told the newspaper the doctors and nurses were “lovely people”, but she was “angry at the lack of funding and the lack of beds”, accusing the government of “failing our children”.

Dr Yvette Oade, chief medical officer at Leeds Teaching Hospitals NHS Trust, said: “Our hospitals are extremely busy at the moment and we are very sorry that Jack’s family had a long wait in our emergency department.

“We are extremely sorry that there were only chairs available in the treatment room, and no bed. This falls below our usual high standards, and for this we would like to sincerely apologise to Jack and his family.”

ITV reporter Joe Pike tweeted about his interview with Mr Johnson, which took place in Grimsby on the campaign trail.

He asked the PM to look at the photo of Jack on his phone several times.

Mr Johnson said he had not seen the picture yet but refused to look at it while Mr Pike questioned him.

Eventually, he took Mr Pike’s phone and put it in his pocket, saying: “If you don’t mind, I’ll give you an interview now.”

Mr Pike said: “You refuse to look at the photo. You’ve taken my phone and put it in your pocket, prime minister.

“His mother says the NHS is in crisis. What’s your response to that?”

Mr Johnson then removed the phone from his pocket and looked at the screen.

“It’s a terrible, terrible photo, and I apologise, obviously, to the family, and all those who have terrible experiences in the NHS,” he said.

“But what we are doing is supporting the NHS, and on the whole I think patients in the NHS have a much, much better experience than this poor kid has had.

“That’s why we’re making huge investments into the NHS, and we can only do it if we get Parliament going, if we unblock the current deadlock, and we move forward.”

The PM then apologised to Mr Pike for taking his phone and returned it.