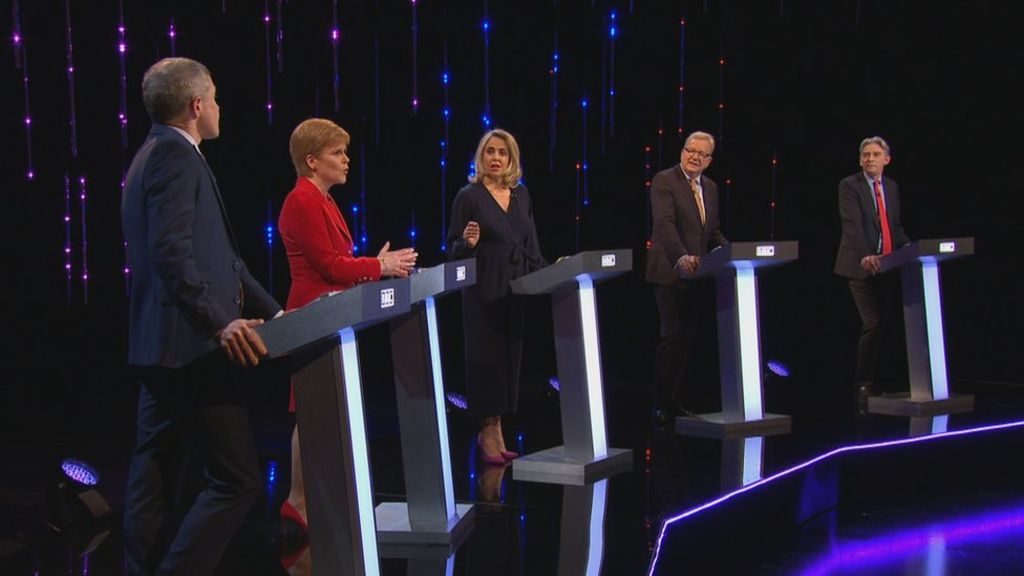 The leaders of Scotland’s four main parties have clashed over independence, Brexit and the public’s mistrust of politicians in a live BBC debate.

The encounter, which was held just 36 hours before Thursday’s UK general election, saw the four leaders face questions from a studio audience.

SNP leader Nicola Sturgeon said that Brexit meant that Scotland should be given a fresh choice on independence.

Her opponents said the result of the 2014 referendum should be respected.

The debate was hosted by the BBC’s Sarah Smith, with the audience selected to reflect the results of both the Brexit and independence referendums in Scotland.

Ms Sturgeon said she wants to hold indyref2 in the second half of next year – when the UK could be in a transition period as it leaves the European Union.

Asked by a member of the audience whether Brexit would make independence “inevitable”, Ms Sturgeon said she did not like to use that word because it “sounds complacent” and “doesn’t treat voters with respect”.

The country’s first minister said the circumstances in Scotland had “changed dramatically” since the referendum when voters rejected independence by 55% to 45%.

Ms Sturgeon insisted: “It is not democracy if people are not allowed to change their minds when the circumstances change, and circumstances in Scotland have changed dramatically and significantly since the 2014 referendum.

“I do believe that people in Scotland, when they get the choice again, will vote to be independent, because the last few years have demonstrated to us the price we are paying for not being independent.

“A broken Westminster system has imposed austerity on Scotland against our will and of course is threatening to impose Brexit upon us. Our voice is being ignored, our votes are being disregarded.”

But Scottish Conservative leader Jackson Carlaw accused Ms Sturgeon of not respecting the results of either the independence referendum or the Brexit vote in 2016 – in which Scots voted to remain in the EU by 62% to 38% while the UK as a whole voted to leave.

Mr Carlaw said: “My view is the most divisive thing you can do is to refuse to accept the outcome of the vote when you put it to the people, you can’t have disposable democracy.

Listing the powers devolved to the Scottish Parliament, including in areas such as health and education, Mr Carlaw added: “It’s those public services that are currently suffering because Nicola Sturgeon’s first, second, third and fourth priority is the constitution, not your jobs, not your health service, not your schools and not the Scottish economy.”

Scottish Labour leader Richard Leonard said a “redistributive” Labour government would challenge the belief that Scotland had been neglected by Westminster.

Mr Leonard argued that “we make our own history and there is no inevitability”, and that the election was an opportunity to “elect a very different kind of UK government” that would treat Scotland and the other nations and regions of the UK with respect.

He added: “People need to understand that with a change of government, with the election of a redistributive Labour government that wants to see much more investment in Scottish public services, in Scottish communities and in the Scottish economy, we would see a real change in people’s quality of life.”

Liberal Democrat leader Willie Rennie claimed that the experience of Brexit had put Scots off independence, saying: “People have seen how difficult Brexit is, how breaking up a union of 40 years, the turmoil, the division, the economic damage that has come with it. We shouldn’t mount chaos upon chaos.”

He called on Scots to unite with others across the UK to try to keep the UK in the European Union, urging them: “Let’s not give up on that battle.”

Mr Rennie said: “I’ll do everything I possibly can to stand with millions of people right across the United Kingdom who want to make it stop because they know that every government prediction has shown there would be economic damage. It would make us all poorer.”

These four politicians debate each other every week at Holyrood, and it showed.

It was a familiar affair as “Nicola”, “Jackson”, “Richard” and “Willie” traded barbs on the constitution and public services – topics where regular viewers will know their positions inside out.

Their closing statements contained the exact slogans each has been hammering away at from day one of the campaign, in what has become the “message discipline election”.

Each leader will be happy to have got their key lines across to any voters still wavering two days from the election, without being taken to task by an audience member in a soon-to-go-viral clip.

With the final debate in the bag, all that’s left is one last big push to get out the vote on Thursday.

What else was discussed in the debate?

Ms Sturgeon was asked about the prospect of striking deals with Labour and the Lib Dems to keep the Tories out of Downing Street.

She said: “I’d certainly want to, but unfortunately the last time there was a hung parliament the Lib Dems decided to put the Conservatives into government and I’d hope that wouldn’t happen this time.”

She added that the SNP being able to exert influence in the event of no party getting a majority “is a much better position to be in than the one we’ve had for the past few years”.

There were heated exchanges on the impact of austerity, after an audience member raised the problem of in-work poverty – prompting Mr Carlaw to accept that while there are “a record number of people in employment, some people have had a certain amount of in-work poverty”.

He said that was why the Tories had pledged to cut National Insurance – saying that would benefit every worker to the tune of £500 over the lifetime of the parliament.

Ms Sturgeon said she had “proudly” chosen not to follow Westminster and pass on tax changes benefiting higher earners.

But Mr Leonard said: “The reality today is that in Scotland one in four children are living in poverty. What’s worse is that of those children, two out of three of them live in a household where at least one adult is in work.”

The debate began with the leaders being asked about the lack of trust in politicians, with Ms Sturgeon saying: “All of us have forgotten we’re opponents not enemies, and we have stopped trying as hard as we should to understand things from another person’s point of view.”

Meanwhile, Mr Leonard said politicians could be “guilty of transposing their own priorities, rather than listening to the priorities of the people and the communities we are elected to serve”.

He added: “It is important we understand what is going on out there in the real world, that we are in touch with the challenges that people face in their day-to-day lives.”

Mr Rennie echoed that, saying: “It is important to listen, and to learn and to understand the experiences that people have in their everyday lives.”