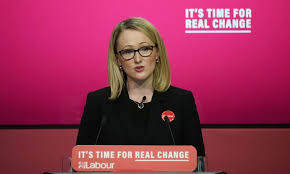 Labour leadership contender Rebecca Long-Bailey has declared she is “nobody’s continuity candidate” as she launches her bid for the party’s top job.

The shadow business secretary is one of six MPs vying to replace Jeremy Corbyn, who is standing down in the wake of the party’s December general election defeat.

Ms Long-Bailey has faced criticism from opponents who claim she would simply represent a continuation of Mr Corbyn’s leadership.

Former minister Jack Straw told Sky’s Kay Burley@Breakfast that Labour needs a Corbyn loyalist as leader “like a hole in the head”.

And former deputy leader Tom Watson said on Monday that Ms Long-Bailey “stands for Corbynism in its purest sense”.

But in an interview with Sky News, the MP for Salford and Eccles sought to dismiss such criticism.

“I’m not driven by my own personal ambition, I’m driven by my principles and my willingness and wanting to develop our policies so we can transform our country and our regions and nations.

“That’s what I’ll be setting out throughout the course of my campaign.”

Ms Long-Bailey fired the starting gun on her leadership bid in an article for the left-wing Tribune website, in which she declared herself a “proud socialist”.

Speaking to Sky News, she said the party “have to recognise” the reasons behind its election defeat, citing a number of factors.

Ms Long-Bailey added that the party “didn’t have a coherent narrative and a strategy to prove to people that we were economically credible and that we could deliver on our ambitious policies”.

But in a sign of the balancing act she is seeking to play in the leadership race, Ms Long-Bailey mentioned her time in Mr Corbyn’s top team as one of her selling points.

“I’ve spent the last four years immersed in the policies, developing many of the policies myself with my team,” she said.

“So I know how important they are and how deliverable they are.”

On the question of Mr Corbyn’s leadership, Ms Long-Bailey said he faced “an unprecedented level of attacks against his character and his history within parliament”.

She continued: “I was proud to support him, I thought he was one of the most honest, kind politicians I’ve ever met and he had fantastic ideas for the future.

“But unfortunately, his character was attacked, and that did affect confidence on the ground when we were speaking to people.

“A new leader, whether that’s myself or one of the other candidates, needs to recognise that they have to have that robust standing within our communities.”

To get on the ballot paper, Ms Long-Bailey and the other candidates need the nominations of at least 22 Labour MPs by next Monday – when nominations close – and later at least 5% of all constituency parties and at least two trade unions.

Early polling suggests Sir Keir is the frontrunner, but a lengthy campaign awaits the candidates.

Voting begins on 21 February and runs until 2 April.

The winner will be announced at a special conference on 4 April.

The race to be Labour’s next deputy leader also continues apace.

Rosena Allin-Khan, a former shadow minister for sport and MP for the London seat of Tooting, is the latest to join the race to succeed Mr Watson.

She told Kay Burley@Breakfast: “I’m the embodiment of what can happen when a Labour government believes in you.

“I want to fight tirelessly to rebuild our party, so that the door doesn’t close on a whole generation’s future.”

Meanwhile, Mr Corbyn has conducted a mini-reshuffle of his shadow cabinet.

Tracey Brabin replaces Mr Watson as shadow culture secretary, while Rachel Maskell takes the place of Laura Pidcock, who lost her seat at the election, as shadow employment rights secretary.