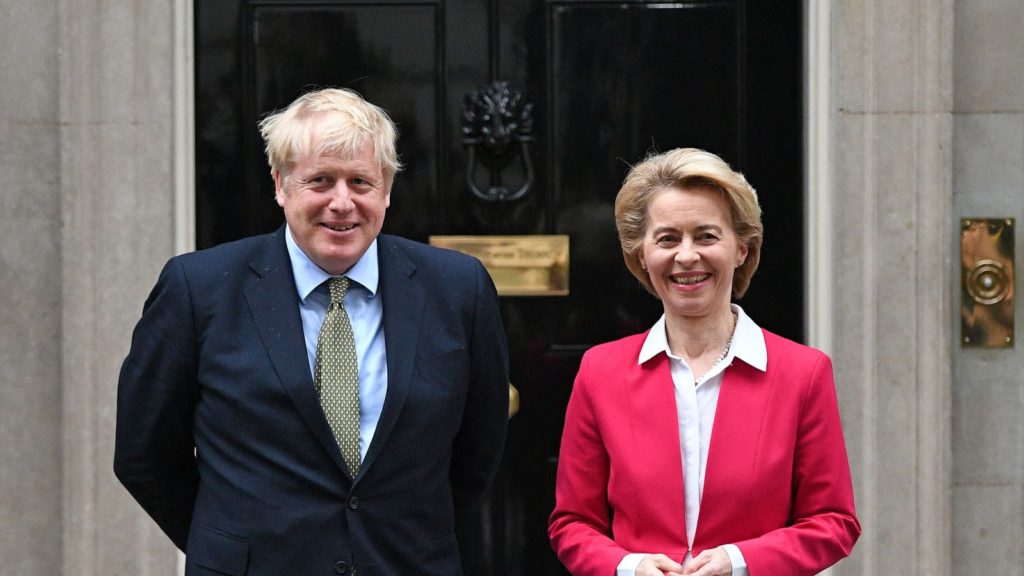 Boris Johnson has told the new European Commission chief he will not extend the transition period beyond the end of the year in their first face-to-face talks.

The prime minister sat down with Ursula von der Leyen who took over the role from Jean-Claude Juncker last year, after she made a speech warning it would not be possible to sort out every aspect of Britain’s future relationship with the EU before the current deadline.

Mrs von der Leyen warned that both sides will have to “prioritise” which elements are negotiated before the end of December 2020.

This is when the Brexit transition period – the timeframe which both sides will use to try to strike a free trade deal – comes to an end.

As it stands, Britain will leave the EU at the end of this month once the withdrawal agreement – which covers the terms of the UK’s EU exit – is ratified.

It will then move into the transition period and the next phase of finalising Brexit, the future relationship.

Welcoming Mrs von der Leyen at Number 10, Mr Johnson said they went to the same school in Belgium, and added of him and his own friends: “We introduced a very rough game called British Bulldog.”

In a statement released afterwards, Number 10 said they had a “positive meeting”.

It continued: “On Brexit, the PM stressed that his immediate priority was to implement the Withdrawal Agreement by January 31. They discussed the progress of ratification in the UK and in the European Parliament.

“He said the UK wanted a positive new UK and EU partnership, based on friendly co-operation, our shared history, interests and values.

“The PM reiterated that we wanted a broad free trade agreement covering goods and services, and co-operation in other areas.

“The PM was clear that the UK would not extend the Implementation Period beyond 31 December 2020; and that any future partnership must not involve any kind of alignment or ECJ jurisdiction. He said the UK would also maintain control of UK fishing waters and our immigration system.

“The PM made clear that we would continue to ensure high standards in the UK in areas like workers’ rights, animal welfare, agriculture and the environment.

“The PM said the UK was ready to start negotiations on the future partnership and Canada-style FTA as soon as possible after January 31.”

Opponents, and some senior figures in the EU, have warned that 11 months is not enough time to negotiate a free trade deal.

Ms von der Leyen echoed those fears during a speech in London on Wednesday ahead of the meeting with Mr Johnson.

She told an audience at the London School of Economics: “Without an extension of the transition period beyond 2020, you cannot expect to agree on every single aspect of our new partnership.

“We will have to prioritise.”

The warning raises the prospect of the EU only countenancing a skeleton free trade deal before the end of 2020 in order to avoid a no-deal Brexit.

Ms von der Leyen said the bloc was ready to agree a new partnership that was “zero tariffs, zero quotas, zero dumping – a partnership that goes well beyond trade and is unprecedented in scope”.

But she warned London that there will be “consequences” if it decides not to align with EU rules post-Brexit.

Mr Johnson has said the UK will not follow the bloc’s rules, but Ms von der Leyen said this would mean a “distant” future relationship.

“Our partnership cannot and will not be the same as before,” she told her audience.

“It will not be as close as before because with every choice comes a consequence. With every decision, comes a trade-off.

“Without a level playing field on environment, labour and state aid, you cannot have the highest quality access to the world’s largest single market.

“The more divergence there is, the more distant the partnership will be.”

However, she went on to say: “But when the sun rises again on February 1, the United Kingdom and the European Union will still be the best of friends and partners.

“The bonds between us will still be unbreakable.”