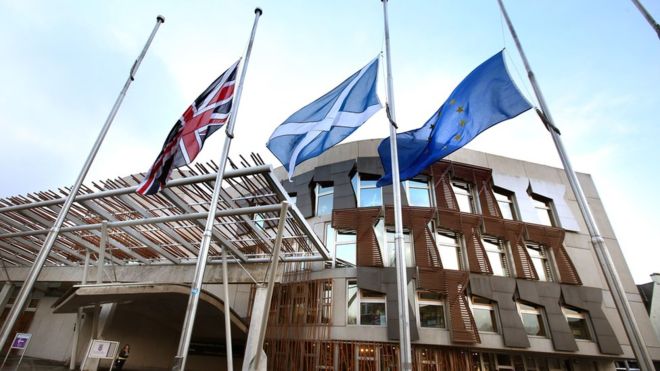 MSPs have voted to say Holyrood “does not consent” to UK Brexit legislation.

The Withdrawal Agreement Bill – which will take the UK out of the EU – is currently passing through Westminster.

The UK government wanted MSPs to give their formal consent to the bill, but all parties bar the Conservatives ultimately spoke out against it.

Scottish Brexit secretary Mike Russell said voters north of the border had repeatedly said “very clearly” that “they do not want to leave the EU”.

His motion rejecting the Brexit legislation passed by 92 votes to 29, with Labour, the Greens and Lib Dems all backing the SNP administration.

Scottish Secretary Alister Jack has indicated that the bill will proceed regardless, saying the UK government would “respect the democratic outcome” of the 2016 referendum.

The Scottish government has long refused to put forward Brexit legislation for consent votes at Holyrood, after the original EU Withdrawal Act passed into law despite opposition from MSPs.

Members instead debated a memorandum detailing the Scottish government’s opposition to the legislation, which states that “the best option for the UK as a whole, and for Scotland, is to remain in the EU, as voted for by the people of Scotland”.

Presiding Officer Ken Macintosh said he would write to counterparts in the UK’s other parliaments to note that Holyrood had withheld its consent for the legislation.

What did the parties say at Holyrood?

Mr Russell led the debate for the SNP, saying that “Scotland has rejected Brexit, and those who espouse Brexit are also being rejected by Scotland”.

Scottish Conservative constitution spokesman Adam Tomkins said the SNP would have opposed the bill no matter what it contained, adding: “You cannot be opposed to a no-deal Brexit and at the same time oppose any and every available deal that would avoid it.”

Scottish Labour’s Alex Rowley said there was a “very real prospect” of the UK exiting the EU without a trade deal after the transition period, saying: “While Brexit will now happen, it will not be over with for a very long time.”

Patrick Harvie said there was “no way the Scottish Greens could back this bill”, adding that “the unspoken reality of course is the the UK government honestly doesn’t give a damn if MSPs give consent or not”.

And Lib Dem leader Willie Rennie said he would “continue to make the case to stop Brexit”, saying the UK’s exit from the EU had already “divided our country, damaged our economy and diminished our place in the world”.

How will the UK government respond?

At Westminster, Scottish Secretary Alister Jack was asked whether the UK government would “respect” MSPs’ rejection of the legislation.

He replied: “What we are respecting is the democratic outcome of referendums, which the SNP does not respect.

“The referendum in 2016 was a United Kingdom referendum, and we voted to leave the European Union. We are respecting that.”

Under the Sewel convention, Westminster would “not normally” legislate across devolved areas without the consent of MSPs.

However Mr Jack insisted that the Brexit legislation was not normal, adding: “This is a constitutional matter, and they are not normally under the remit of the Scottish Parliament”.

Scottish and UK ministers are set to meet for Brexit talks at a Joint Ministerial Council summit in London on Thursday.