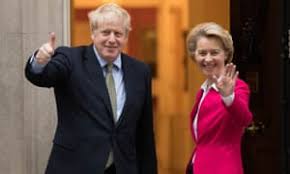 After nearly four years, today will see the UK take its first real step towards leaving the EU before negotiating a tricky Brexit trade deal.

The Commons is set to vote for Boris Johnson’s Withdrawal Agreement Bill (WAB) after the Prime Minister emerged victorious from the December election with an 80-seat majority.

But what happens next? Here, we walk you through the next 12 months.

The Brexit bill will make its way to the Lords on Monday 13 January, and should receive royal assent by 22 or 23 January, giving the government plenty of time to plan its celebrations for what will surely be known as Brexit Day on 31 January.

The Prime Minister’s spokesman this morning reiterated that the UK would be ready to negotiate from 1 February.

However the EU still has to thrash out a negotiating mandate for Michel Barnier and co. It is thought the EU27 will sign it off at a meeting on 25 February, with trade talks starting on 1 March.

Government has also made it clear that it will be happy to carry out tandem talks with the US, with one source telling City A.M. it is “conceivable” – albeit not necessarily likely – that talks could start with Donald Trump’s team before they begin with Brussels.

Either way, it won’t be until March that David Frost, the Prime Minister’s sherpa, renews his conversations with Barnier.

Yesterday Boris Johnson met with Ursula Von Der Leyen and Michel Barnier, and this morning the chief negotiator said those talks would be as wide-ranging as is hoped.

We will strive for a partnership that goes well beyond trade and is unprecedented in scope: covering everything from services and fisheries, to climate action, energy, transport, space, security and defence.

But he also warned that this could not be concluded before the December 2020 deadline:

That is a huge agenda. And we simply cannot expect to agree on every single aspect of this new partnership in under a year …

If we want to agree on each and every point of this political declaration – which would lead to an unprecedented relationship – it will take more than 11 months.

EU Commission president von der Leyen yesterday warned it would be impossible to strike a deal before the end of 2020.

Both sides have talked about mini Brexit trade deals; sector-specific agreements that could be concluded during the period.

The political declaration names financial services equivalence as the first area to be tied up, not least because both sides want to ensure they maintain “financial stability, market integrity, investor and consumer protection and fair competition”.

This will be the first real test of whether the UK is on course for a Brexit that avoids a cliff-edge, and may well dominate the summit that is scheduled for both sides to do stock-take of talks so far.

June is also the last month in which an extension can be sought – although as things stand, the PM has repeatedly ruled that out.

July 2020: Fishing for an agreement

Next up on the list of sectors to be thrashed out is fisheries, with July earmarked as the point at which an agreement must be ratified. This is of course one of the totemic tests of Brexit – but the EU is fully expected to play hardball.

Johnson’s first Conservative party conference as Prime Minister of a majority government will take place in September. This is viewed by some longstanding MPs as a good test of where we are going. Of course, he will be playing to the gallery, where he is at his best, but some proof of progress will be required at this stage because the clock will be ticking loudly on a Brexit trade deal by now.

One issue likely to be gaining ground by this point will be Northern Ireland. If it hasn’t already erupted, the implementation of the Northern Ireland protocol will return to the centre ground around now as the details are worked through (or not).

Although the implementation period runs to the end of the year, the most important date in the calendar so far looks likely to be 26 November, when the Brexit trade deal must be ready to be presented to European Parliament if it is to be ratified in time.

MEPs will be in Strasbourg in the final week of November for their penultimate plenary session of 2020. Yesterday government sources indicated that they wanted to move away from Theresa May-era “dramas” built up around a single date, however this date still looks likely to be dramatic.

By December this year we will know whether the UK is leaving with a new free trade agreement in place, or whether we will be trading on WTO terms, with all the additional tariffs, checks and processes required.

And despite the inclusion of 31 December within the WAB, critical MPs agree that this is little more than “posturing” – it could be changed with a one-line bill if need be. Most trade experts agree with Barnier that a deal is unlikely to be concluded in this time.

However, more loyal MPs point to the fact that “everybody says” Johnson couldn’t get a new withdrawal agreement from the EU and did.