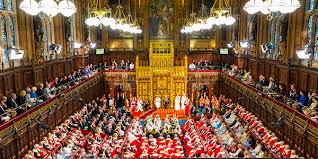 Peers have been told to listen to the will of the country and back legislation paving the way for the UK to leave the European Union on January 31.

Boris Johnson’s European Union (Withdrawal Agreement) Bill is expected to clear the Commons on Thursday after the Tory general election victory gave the Prime Minister the comfortable majority he desired.

But the legislation will then head to the upper chamber, where there is no Government majority and where peers repeatedly dealt blows to Theresa May’s administration.

“The country did deliver a very clear message that they want Brexit to be resolved,” the Prime Minister’s official spokesman said.

With peers expected to begin work on the Withdrawal Agreement Bill (Wab) next week, the Government wants the legislation “to complete its passage through both houses as smoothly as possible”.

The spokesman said the legislation clearing the Commons on Thursday would be a “significant positive step” towards the Prime Minister’s target to “get Brexit done”.

It follows the torment endured by Mrs May as she repeatedly tried and failed to get a Brexit deal through the Commons.

Downing Street stressed it was ready to begin the next stage of the Brexit process – negotiating a trade deal by the end of the year – on February 1.

But Brussels’ chief Brexit negotiator Michel Barnier warned the UK’s market access to the EU could be limited unless it agreed to conditions on state subsidies.

“If the UK wants an open link with us for the products – zero tariffs, zero quotas – we need to be careful about zero dumping at the same time,” Mr Barnier told a conference in Stockholm.

“I hope that this point is and will be correctly understood by everybody. We will ask necessarily certain conditions on state aid policy in the UK.”

He also insisted that Britain’s goal to have a full free trade deal by the end of the year was unrealistic.

“We cannot expect to agree on every aspect of this new partnership,” Mr Barnier said, adding “we are ready to do our best in the 11 months”.