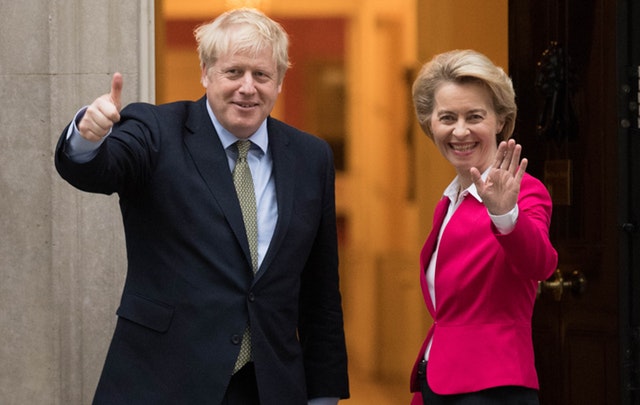 Prime Minister Boris Johnson has repeatedly insisted the UK will not ask for an extension.

Boris Johnson’s ambition to get a full trade deal negotiated with Brussels by the end-of-year deadline is “just not possible”, the EU’s trade commissioner has said.

Phil Hogan said on Thursday that negotiators were “certainly” not going to be able to tie up everything on the future relationship between the bloc and the UK in the time frame.

Mr Hogan said Ms von der Leyen came out of that meeting thinking “we have to prioritise” on aspects of the agreement if the UK is to exit the transition period at the end of 2020.

“It’s just not possible. Especially if we have to make a decision about the transition by July 1.”

Mr Johnson has repeatedly insisted the UK will not ask for an extension by the summer deadline to make that request.

Mr Hogan, a former Irish minister and an ally of Taoiseach Leo Varadkar, said the EU was “certainly open to suggestions” on how to manage the situation politically but added that the “wisest thing” would be to not set deadlines.

“I think we’ve seen that putting ourselves into timelines in the last few years have not been that helpful, especially in the way it played out in the House of Commons,” he said.

Mr Hogan made the comments to former EU trade commissioner Lord Mandelson at an event at the RSA in central London, where he was appearing on a video-link from Washington DC.

In the US, Mr Hogan has been discussing transatlantic trade with president Donald Trump’s representatives.

He advised that the UK can ignore American threats that it will not share intelligence if Britain accepts technology from Chinese firm Huawei in its 5G networks.

“I think that’s a bit of sabre-rattling. I don’t think that will actually happen at the end of the day,” Mr Hogan told the Labour peer.

“I think everybody has an interest in making sure that we are safe and I think the United States … at the end of the day, you can call their bluff on that one.”