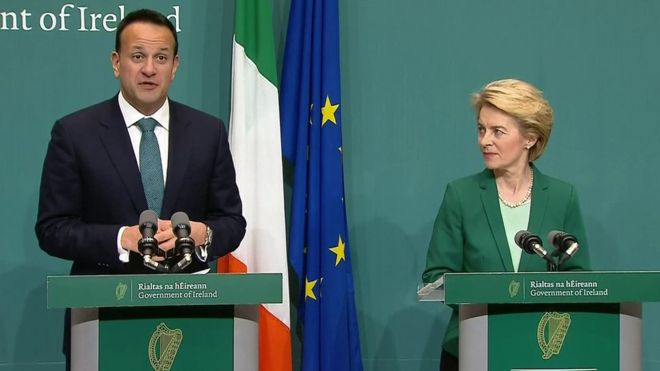 The taoiseach Leo Varadkar has called for “a level playing field” in the Brexit negotiations.

The Irish prime minister said there must be a common minimum standard so the UK could not “undercut” the EU.

He said the next step is to negotiate a free trade agreement between the UK and EU.

Mr Varadkar said he wanted to “restate Ireland’s deep appreciation and thanks” for solidarity shown by the commission, European Institutions and other member states over Brexit.

“Only as a result of that, we have a Withdrawal Agreement which assures us there is no hard border, that citizens’ rights are protected and the travel area between Britain and Ireland remains in place and that the Good Friday Agreement is protected,” he said.

“We saw a real demonstration of that in the fact that the institutions in Northern Ireland are now back up and running.”

The taoiseach added: “I always felt removing uncertainty around Brexit was one of the crucial ingredients that is required to get the parties together again.”

Speaking in Government Buildings in Dublin, Ms von der Leyden said there’s “almost no other country in the European Union” more affected by Brexit than Ireland.

Ms von der Leyden said the Republic of Ireland and Northern Ireland were “one of our top priorities” during the withdrawal negotiations.

“We’ve said that Ireland will stay at the heart of the European Union,” she said.

She thanked Mr Varadkar for his work and leadership in the Brexit process, adding that the EU will watch over the implementation of Brexit “very closely”.

“We will have around eight months because the negotiation talks will start at the end of February or beginning of March.

“We have a plan but we have to work very hard to reach our goal.”