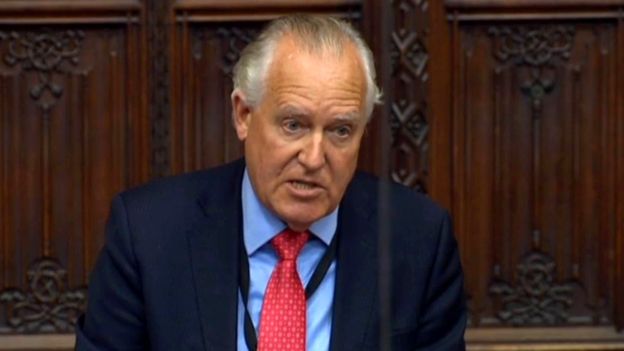 The Northern Ireland Assembly has passed a motion withholding consent for the UK’s withdrawal from the European Union.

The motion put forward by the Executive Office asked MLAs to consider parts of the Brexit bill that affected Northern Ireland.

It passed without a formal division on Monday.

The bill includes a role for the assembly in deciding whether Northern Ireland should still follow some EU customs rules.

The motion was to “affirm that the assembly does not agree to give its consent” to that.

A request by the TUV leader Jim Allister for the assembly debate to be delayed until next week was rejected by MLAs.

Mr Allister argued the Executive Office had only submitted the motion on Friday and that there had not been enough time for MLAs to propose amendments.

The Speaker Alex Maskey said it was “regrettable” the motion had not been tabled earlier.

First Minister Arlene Foster apologised for the short notice, but said she felt it was important the assembly had its say on the matter before the EU Withdrawal Bill receives its third reading in the House of Lords on Tuesday.

A former secretary of state has said the government’s Brexit plans will do “untold damage” to Northern Ireland businesses.

Labour’s Lord Hain said the government was asking small and medium businesses in Northern Ireland to “buy a pig in a poke”.

He said NI businesses have been told they would just have to adjust to new regulations, but it was still not clear what those would be.

Lord Hain also accused the government of “trying to have it both ways”.

“On the one hand they’re saying to businesses in Northern Ireland and to politicians it’s important that you reform and make the Northern Ireland economy more competitive – fair enough,” he said.

“But then they are imposing enormous shackles on the ability of enterprises to succeed with these uncertain, potentially costly, administerially difficult burdens that they will have to bear for trading across into Great Britain.”

He added: “I don’t think the government is being fair with Northern Ireland – either its businesses or its politicians – by telling them they have to reform and on the other hand making it more difficult for them to do so by weakening the economy.”

After the UK leaves the EU on 31 January, it will enter an 11-month transition period, where it will largely follow EU rules but will not have any representation in the bloc’s institutions.

At the end of the transition period, Northern Ireland will continue to follow EU rules on agricultural and manufactured goods, while the rest of the UK will not.

This will mean some new checks and processes for goods moving between Northern Ireland and other parts of the UK.

The details of those processes have to be negotiated between the EU and UK and new systems for businesses will have to implemented.