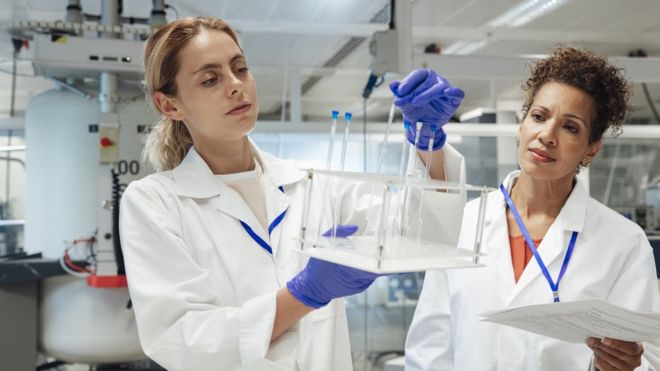 The Government has announced that a fast-track visa will open next month to attract the world’s leading scientists.

The visas will have no cap on the numbers of suitably qualified people able to come to the UK.

The announcement follows a pledge last year by the PM to turn the UK into a “supercharged magnet to attract scientists like iron filings”.

Researchers remain concerned about the uncertainty of the UK’s role in EU research programmes following Brexit.

The Prime Minister, Boris Johnson, said: “The UK has a proud history of scientific discovery, but to lead the field and face the challenges of the future we need to continue to invest in talent and cutting-edge research.

“That is why as we leave the EU I want to send a message that the UK is open to the most talented minds in the world, and stand ready to support them to turn their ideas into reality.”

The new visa system will begin on February 20 and managed by the UK Research and Innovation Agency (UKRI), which funds government research, rather than the Home Office. This is to ensure that suitable applicants are quickly assessed and fast-tracked by those qualified to asses their scientific credentials, rather than immigration officials.

Tacitly addressing concerns about the impact of Brexit on the UK’s participation in international programmes, the government claims the scheme has been introduced in order to enable UK-based research projects to recruit the best scientists and mathematicians.

The announcement is a big win for research organisations who had been lobbying the government very hard for a fast-track visa system for leading researchers to mitigate what they feared would be a brain drain after Brexit.

They are especially pleased that UKRI, with the support of other so-called endorsed research organisations, can vouch for an applicant – instead of Home Office officials attempting to determine their scientific attainment.

Prof Sir Venki Ramakrishnan, president of the UK’s Royal Society, was among those lobbying hardest for the system to be run by research organisations. He welcomed the announcement, saying the new visa would be “attractive” to talented researchers and specialists from all over the world – and at all stages of their careers.

“It sends out a positive message that the UK is committed to remaining open to overseas science talent who would collaborate with our outstanding home-grown minds,” he said.

“What is good for science is good for everybody, and can help tackle important challenges such as climate change or disease.”

Sir Venki added: “The government has listened to the research community, and this is an important first step in creating the visa system that we need for attracting global scientific talent – one that is welcoming, faster and more flexible, and takes into account the long-term aspirations of scientists and their families.”

But Dr Robert Massey, deputy director of the Royal Astronomical Society tweeted that he was concerned the system would still restrict the entry of young, up-and-coming researchers.

He gave it “a cautious welcome”, adding: “The issues will still though be about calling for the ‘most talented’, which isn’t a label many early career researchers identify with.”

BBC News reported last year that, after Brexit, science is one of the top priorities for the PM’s chief aide, Dominic Cummings.

Senior research leaders have confirmed that they have been in talks with Mr Cummings and the Science Minister Chris Skidmore in Downing Street.

The talks focused on how best to spend a possible multi-billion pound increase in research funding. The outcome may be announced in the March budget.

EU researchers account for about half of the total UK scientific workforce of 211,000.

Currently, they do not need visas to work in British labs. But freedom of movement between the UK and EU is expected to end after the Brexit transition period on 31 December 2020.

The government says it will introduce an Australian-style points-based system by January 2021.

Sir Jim McDonald, president of the Royal Academy of Engineering, said he was “delighted” to see that the new visa system would be run by researchers rather than civil servants.

He commented: “The new arrangements will allow awardees of a much larger range of UK and international fellowships to receive fast-track visas through the academies, while UKRI will administer a route that awards fast-track visas to principals and named team members of research and innovation grants from a range of endorsed funders.”

The head of UKRI, Prof Sir Mark Walport, said: “Today’s announcements further underline the importance of research and innovation to the future success of the UK and the government’s continued commitment and investment.”

But she added that the new measures “suggest a lack of understanding of innovation, which depends on scientists, researchers, engineers and technicians at all levels and not just a few ‘top talent'”.

“Ending the Erasmus scheme, denying visas to scientists from Africa and Asia, imposing a minimum salary of £30,000, these all adversely affect the richness and quality of our scientific base,” she said.

“Science relies on thousands of researchers, and this announcement does nothing for the vast majority of them. If the government is serious about championing UK science, it must prioritise continued mobility as part of our future relationship with the EU,” she said.