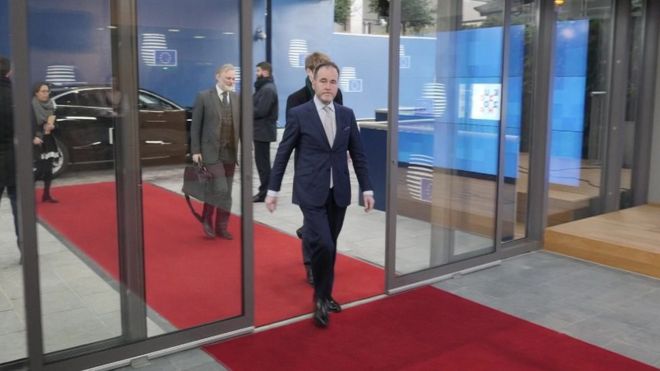 A UK minister has attended a European Union meeting for the final time before the country leaves the bloc on Friday.

Speaking after the General Affairs Council meeting in Brussels, Foreign Office Minister Chris Pincher said the UK was “looking forward to the next chapter” in its relations with the EU.

The UK and the EU’s 27 remaining countries would “continue to defend shared values” after Brexit, he said.

The European Parliament will hold its vote on the Brexit deal on Wednesday.

It comes after the withdrawal agreement was formally signed by Boris Johnson and EU leaders last week.

Topics discussed at Tuesday’s meeting included Croatia’s six-month stint in charge of the EU presidency, which officially begins this month.

As he arrived for the meeting, Mr Pincher told reporters: “I’m here to reassert to my EU friends and colleagues that, though we are leaving the EU, we are not leaving Europe.

“Our shared history, our shared values, our commitment to security and prosperity continue as equals – sovereign equals.”

He wished his counterparts “the best for the future”.

He later tweeted a number of pictures of him talking to his European counterparts.

But she added that Brexit should be seen as the “new starting point for building a close relationship and partnership” with the UK in the future.

French European Affairs Minister Amélie de Montchalin said the UK and EU needed to build a new relationship “where trust can be regained”.

“The distance between Dover and Calais will not increase over the night on Friday,” she told reporters ahead of the meeting.

“We will remain very close geographically, and we should give ourselves the means to achieve a loyal and balanced relationship”.

The UK’s departure on Friday will be followed by an 11-month transition period, during which the UK will continue to follow EU rules.

The moment is set to be officially marked in London with a light show in Downing Street and a speech from the prime minister.

A special 50p coin will also enter circulation to mark the occasion.