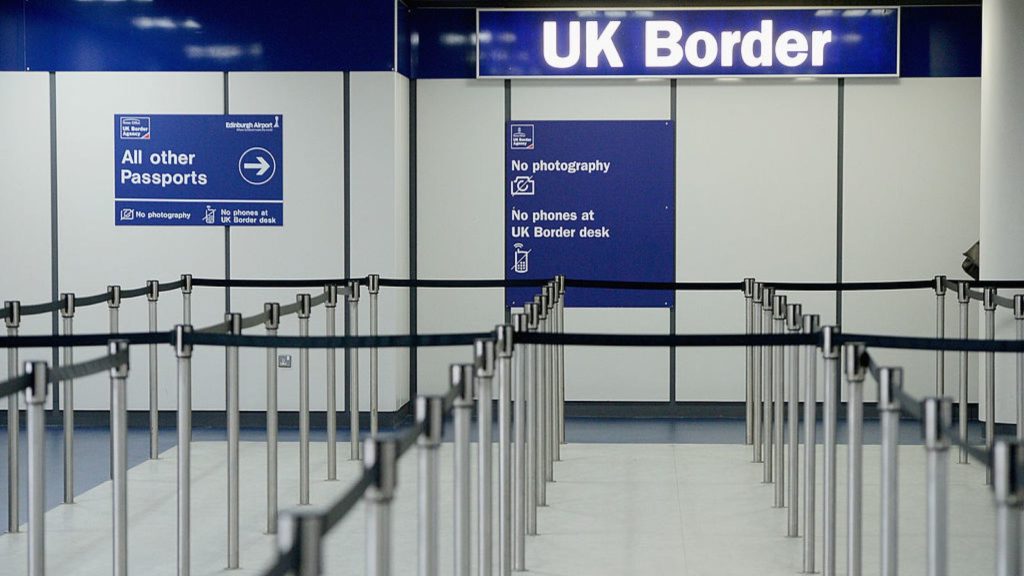 An independent report into the options for UK’s future immigration policy has recommended that the government cut the salary threshold for skilled migrants.

The Migration Advisory Committee (MAC) has said it should be reduced from £30,000 to £25,600 for those coming to the UK with a job offer.

“No perfect system exists” and “difficult trade-offs” will be unavoidable, the committee warns.

It comes as ministers prepare to publish a new immigration bill in the coming weeks, which will set the terms for post-Brexit migration.

The report finds that while the system envisaged by the government could see a reduction in population growth, along with reduced pressure on the NHS, public finances and schools, it could also impact economic growth, damage sectors dependent on low-skilled workers and put increased pressure on social care.

Downing Street said the government would “carefully consider” the contents of the report.

Home Secretary Priti Patel said: “I think it’s important to recognise that the British public voted for change when it comes to immigration and with that they have voted for an Australian-style points-based system.”

She added that the government wanted a system that is “fit for purpose, fit for the future, is in the control of the British government, but actually works for our economy and our labour market”.

But Labour said the government was “tying itself in knots” over immigration, while the Liberal Democrats said the time-frame for establishing the new system was a “recipe for disaster”.

Last year, the government asked the MAC to examine the issue of salary thresholds and the implementation of an Australian-style points-based immigration system after the Brexit transition period ends in December.

Publishing its recommendations, the MAC said the government should reduce the salary threshold for skilled migrants entering the UK with a job offer from £30,000 to £25,600.

On the issue of a points-based immigration system, which was promised in the Conservative party manifesto on which Boris Johnson won a majority last December, the MAC recommends that such a system should only be used as a route of entry for skilled workers without a job offer.

The report suggests modifying the existing Tier-1 Exceptional Talent visa so that it runs on a so-called “expression of interest basis” and measured on a points system based on characteristics the government wants to attract.

The MAC report also suggests some of the attributes considered when assigning points could include academic qualifications, age, study in the UK and previous experience in priority areas of the economy.

This would mean prospective migrants who are able to acquire sufficient points would be added to a pool from which there would be a monthly draw, with those selected invited to make a full application.

The report recommends maintaining an overall annual cap on those admitted, too.

This appears to run counter to the announcement made yesterday by Mr Johnson, in which he said Tier-1 visas would be replaced next month with a global talent visa which would not be subject to any cap.

MAC chair, Professor Alan Manning, said: “Our recommendations are likely to reduce future growth of the UK population and economy compared to freedom of movement, by using skill and salary thresholds.

“No perfect system exists and there are unavoidable, difficult trade-offs.

“The largest impacts will be in low-wage sectors and the government needs to be clear about its plans for lower-skilled work migration.

“The government should ensure that the mistakes of previous UK points-based systems are not repeated.”

Yesterday the prime minister indicated that low-skilled workers from overseas would require a job offer to enter the country, but insisted the government would work with sectors likely to be impacted by more stringent requirements.

He told Sky News: “What we want to have is a system that is responsive to the needs of the UK economy in all its dimensions.

“There will be sectors like agriculture, retail, hospitality that do need to continue to attract low skilled workers but we want to make sure that that’s done very much on the basis of jobs that they have to come to here in the UK.

“What we want is to end the situation where we have uncontrolled immigration coming in for low-skilled jobs, pushing down wages and having various other effects.”

“Even a lower salary cap won’t help recruit the hospital staff we need, the social care workers or many of the new recruits to private businesses.

“We need a system based on treating people and their families decently who come here with firm job offers, whatever their pay level.”

Christine Jardine, home affairs spokesperson for the Lib Dems, said: “The Conservative government wants to impose an entirely new immigration system in less than 12 months, without any proper consultation and managed by the discredited Home Office.

“That is a recipe for disaster.”