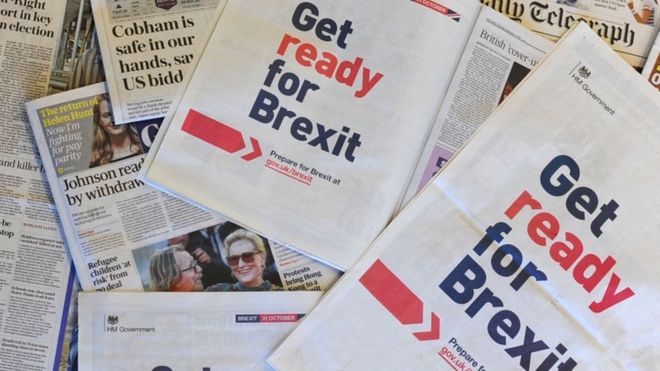 A multi-million pound publicity blitz to prepare the public for leaving the EU appears to have had little impact, a spending watchdog has said.

The National Audit Office said £46m was spent on the “Get ready for Brexit” campaign ahead of the UK’s expected departure at the end of last October.

But the campaign was halted three days before the UK was supposed to leave after the EU granted another extension.

The NAO said it was “not clear” it left people “significantly better prepared”.

But the Cabinet Office, which is in charge of Brexit preparations, said to have not done anything in the run-up to the 31 October deadline would have risked “significant and unnecessary disruption”.

The department estimated the campaign reached had 99.8% of the population, with every member of the public having the opportunity to see the range of billboard, print, TV and online adverts 55 times.

The publicity drive was ordered by Boris Johnson after he became prime minister last July, with his “do or die” promise to leave by 31 October.

It ran for nearly two months before being halted on 28 October – after the PM was forced by Parliament to request a further three-month delay.

The campaign encouraged people and businesses to visit the government’s main gov.uk website to answer questions and receive advice on preparing for the UK’s exit from the bloc.

Among those specifically targeted were British citizens who were intending to travel to Europe in the days and weeks after Brexit and businesses that exported to the EU.

The watchdog said the numbers of people looking for information about Brexit did not notably change as a result – ranging from 32% and 37% during the campaign, to 34% when it stopped.

“However, it is not clear that the campaign resulted in the public being significantly better prepared.”

The Liberal Democrats said the campaign had been “an expensive propaganda stunt” designed to help get Mr Johnson re-elected.

Their education spokeswoman, Layla Moran, urged the Electoral Commission to look into whether the millions spent should be included in the Conservative Party’s declared election campaign expenditure.

In response, the government said the watchdog had acknowledged the campaign increased public awareness of the action they needed to take to be ready to leave the EU.

The UK will leave the EU at 23:00 GMT on Friday 31 January. It will continue to follow EU rules until the end of 2020 under the terms of an 11-month transition period.