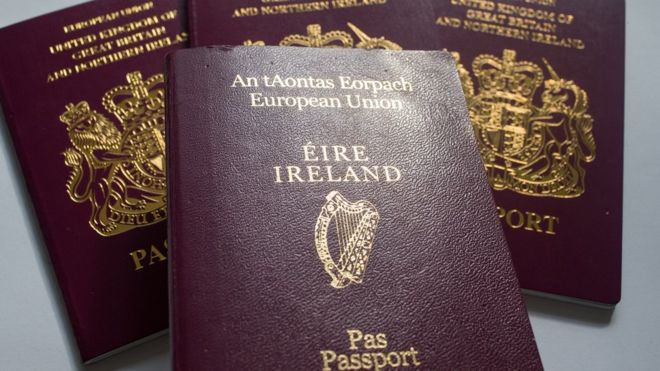 About 200,000 of those made their first application after the Brexit referendum.

That number only accounts for those who have made new applications or renewed their passports in the last 10 years – the total figure could be higher.

With Brexit approaching on Friday, will people with Irish passports retain more rights than those with British passports living in Northern Ireland?

What about other EU citizens living in Northern Ireland – how will their lives be affected?

On a visit to Belfast on Monday, the European Union’s chief negotiator Michel Barnier said: “Whilst Northern Ireland will no longer be part of the EU, people born and raised here that choose to be Irish citizens will still be EU citizens.

“This means they can continue to move and reside freely within the EU. The UK has committed to upholding their rights.

“They cannot be discriminated against on the basis of nationality.”

So what happens to people living in Northern Ireland who have British passports?

The truth is no one can say with complete certainty.

Next week, we’ll enter the transition phase where the rights of British and Irish passport holders won’t change until 31 December when the negotiations are due to end.

This time next year, things could be different.

Colin Harvey, a Professor of Human Rights Law at Queen’s University, Belfast, said there are many issues that need to be addressed.

“The worry is that many British and Irish citizens around these islands take certain rights for granted and maybe those rights are written in sand.”

Prof Harvey, who is in favour of holding a border poll in 2023, says even the Common Travel Area, which guarantees free movement for British and Irish citizens in both countries, is not backed by legislation, even though British and Irish ministers signed a deal to preserve it last May.

“At the moment they are rather informal and rather ad hoc,” he said.

“They are there, but they need to be more secure and legally underpinned.”

Travel for NI citizens in EU

What about travel? At the minute the EHIC card (the new name for the E1-11) still gives people in Northern Ireland access to healthcare while travelling in other EU countries.

Again, that will remain the same while the negotiations continue.

But Prof Harvey points out it is not future-proofed.

“It’s interesting to note that last year the Irish government made a proposal that it was willing to underwrite and fund, if you like, all of the people of Northern Ireland so it will be very interesting to see how that conversation advances in the year ahead.”

The Common Travel Area is supposed to protect the rights of British and Irish passport holders, but what does Brexit mean for other passport holders already living and working in Northern Ireland, and in particular, for those who commute across the border?

Commuting across the border

Les Allamby, chief commissioner at the NI Human Rights Commission, said: “Those who are not Irish but live in Donegal and work in Altnagelvin Hospital are called frontier workers.

“It’s not clear how those people will be affected by the new arrangements and we know there are significant numbers of people working in hospitals in other forms of care, for example, who live in the south but work in Northern Ireland.

“Those people will have to watch very carefully to see what arrangements are put in place because we don’t know at this stage how they will be affected by the UK leaving the EU completely after the transition period.”

Other rights around equality in employment are enshrined in the 1998 Good Friday Agreement – which is further guaranteed in the Government’s EU withdrawal agreement.

Mr Allamby says this will further protect all citizens in Northern Ireland.

“We will retain some rights that we won’t necessarily retain elsewhere because of the Good Friday Agreement,” he said.

“That illustrates the value of the agreement at a time when no one who signed it would have thought about these ramifications 22 or 23 years later.”

What happens to things like mobile phone roaming charges will depend on what is agreed about the UK’s future economic relationship with the EU, which could include limits or the reintroduction of mobile roaming charges.

Possibly, according to Mr Allamby.

“This summer you’ll be able to travel freely with a British or Irish passport but once we get to the phase of completely leaving the EU, an Irish passport may become more advantageous for travel, possibly to access education and other services.”