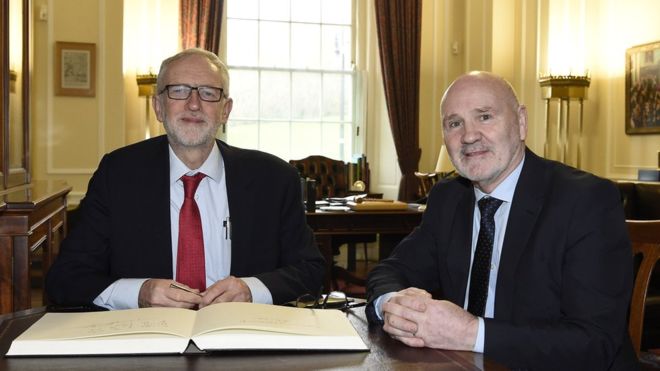 Labour leader Jeremy Corbyn has said it is “very difficult to know” if Brexit brings a united Ireland any closer.

He was speaking after meeting the five main political parties at Stormont during a visit to Northern Ireland.

Questioned on whether Brexit brings Irish unity nearer, he said there were “more important priorities”.

Mr Corbyn added that after Brexit “the issue that is important is the immediacy of funding and trading arrangements”.

It was his first visit to Northern Ireland since 2018.

On arrival, he was greeted by Speaker Alex Maskey and he signed the visitors’ book.

The Labour leader also signed the book of condolence for the late Seamus Mallon, the former deputy first minister, who died last week.

Jeremy Corbyn’s time as Labour leader is nearly at an end.

After losing the general election campaign, he’s set to stand down in April once his successor has been announced.

So his visit to Northern Ireland on Thursday wasn’t just for official opposition business – perhaps also a farewell tour.

He met the five main Stormont parties to talk about Brexit, a day before the UK officially leaves the EU.

The return of the power-sharing assembly was also featured in the discussions.

Mr Corbyn said he had congratulated the local parties for working to restore devolution.

He said he believed Prime Minister Boris Johnson was still unclear what the future looked like post-Brexit.

Mr Corbyn added that the prime minister did not have “a clear answer to businesses and workers ” regarding trading arrangements for Northern Ireland.

During his visit, Mr Corbyn was expected to discuss the government’s Brexit deal and the recent restoration of devolution.

Mr Corbyn’s successor will be named on 4 April.