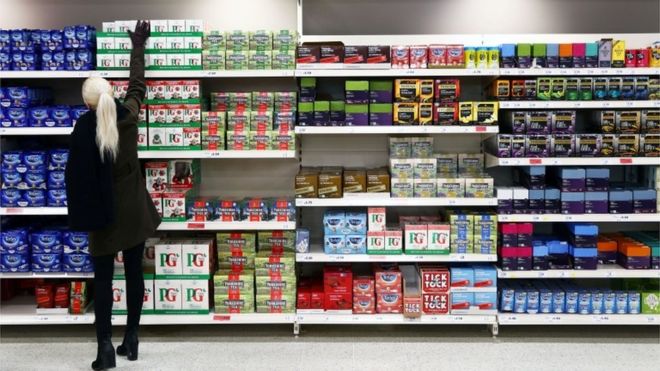 Stormont officials working on Brexit have said there is real concern consumers in Northern Ireland will face reduced choice and higher prices when the withdrawal deal is implemented.

Some goods entering NI from GB will face new checks and controls.

“There are significant consequences of not landing this properly,” senior official Paul Grocott told the economy committee.

The nature and extent of checks will have to be agreed by the UK and EU.

At the end of the Brexit transition period Northern Ireland will continue to follow EU rules on agricultural and manufactured goods, while the rest of the UK will not.

Those supermarkets supply their NI stores from distribution centres in GB.

The EU has strict rules on food products entering the single market: meat, fish and dairy products must enter through designated inspection posts.

The products must have export health certificates and a proportion of goods are physically inspected.

That could mean increased complexity and cost for supplying consumers in Northern Ireland.

Mr Grocott said Stormont ministers would have to articulate the potential human impact of decisions taken by the UK and EU.

“Trade policy is one thing but the impact on vulnerable groups being able to afford their shopping bill is significantly different and much more important.”

He was also asked about the UK government promise than NI businesses will maintain “unfettered access” to the GB market.

Mr Grocott said the substance of unfettered access is currently “uncertain at best” and that businesses want “practical details.”