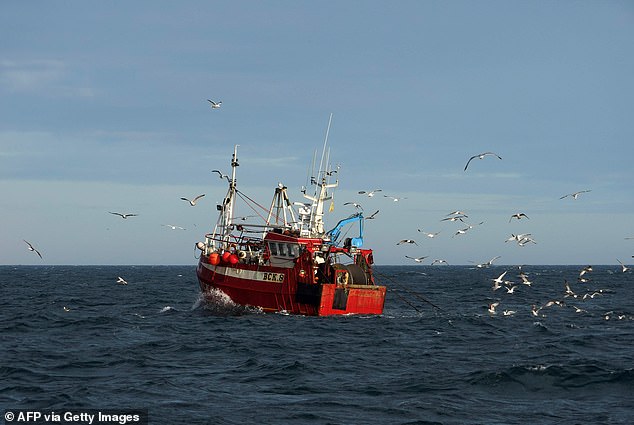 Britain is today bolstering the ranks of its fishing police force ahead of a potential showdown with the European Union over post-Brexit access to UK waters.

Fishing rights have already emerged as one of the key battlegrounds in future partnership talks between the UK and the EU.

Brussels is adamant that there must be ‘reciprocal access’ on fishing so that existing arrangements which allow European trawlers to fish near the UK can continue.

But the government is equally adamant that who fishes in British waters will solely be a decision for ministers and priority will be given to British boats.

Growing tension over future fishing access is likely to spark fears of a repeat of the so-called ‘scallop wars’ in 2018 which saw French and British boats angrily clash over access to shellfish off the coast of Normandy.

The UK is taking steps to prepare for all eventualities, with the government having reportedly hired two extra ships to provide additional help to the Royal Navy Fishery Protection Squadron’s current four ship fleet.

Meanwhile, more than 20 other boats are believed to have been put on standby which means Britain’s fishing patrol capabilities are said to be tripling.

Every coastal state has an Exclusive Economic Zone (EEZ) which can extend up to 200 nautical miles from land and over which that country has special fishing rights.

But in the EU each country’s EEZ is merged into one joint zone in which fishermen from all member states enjoy equal access, with activity regulated by the bloc’s controversial Common Fisheries Policy (CFP).

The UK is leaving the EU’s CFP as part of Brexit which means it will be able to take back control of its considerable fishing grounds.

The bolstered Royal Navy squadron will be tasked with patrolling the entirety of the UK’s EEZ to make sure all vessels operating within it have the right to do so, kicking out those that do not.

Britain has resisted the idea floated by senior figures in the EU that UK giveaways in areas like fishing could be met with EU concessions in other areas like access to financial markets.

The UK is yet to decide exactly what its post-Brexit fishing rules will be.

But Britain has already begun to put in place additional measures to make sure the new system can be appropriately enforced by boosting the number of ships it can call on to patrol its coastal waters.

The Department for Environment, Food and Rural Affairs has reportedly commissioned two extra ships to provide additional help to the RNFPS.

A further 22 boats are on standby to help out if they are needed while more than 30 extra enforcement officers have been recruited to inspect fishing vessels and make sure they have the right to be in UK waters.

The squadron currently has four River-class offshore patrol vessels and one helicopter so the additional boats – first reported by Politico – represent a significant increase in capability.

A Defra spokesman said: ‘We want a relationship with the EU based on friendly cooperation between sovereign equals.

‘After the transition period, we will be an independent coastal state with the right to decide who fishes in our waters and on what terms.’

After the UK and EU split on January 31, both sides entered a transition period, ending in December, during which they will try to hammer out the terms of a trade deal.

The UK has committed to abiding by EU fishing rules until the end of that transition period.

Boris Johnson said in a big Brexit speech on Monday that Britain is ‘ready to consider an agreement on fisheries, but it must reflect the fact that the UK will be an independent coastal state at the end of this year 2020, controlling our own waters’.

He added: ‘And under such an agreement, there would be annual negotiations with the EU, using the latest scientific data, ensuring that British fishing grounds are first and foremost for British boats.’

But the EU’s chief Brexit negotiator Michel Barnier said there needed to be ‘reciprocal access to our territorial waters and our markets’.

He also insisted that ‘agreement on fisheries will be inextricably linked to the trade agreement’.

Fishermen from any registered member state can enjoy equal access to the fish in the entirety of the joint EU zone but the CFP imposes quotas on what can be caught.

The CFP does allow member states to retain control of the regulation of fishing activities in inshore waters – those up to 12 miles off the coast.

The CFP is hated by British fishermen and scrapping it was one of the key messages of the Leave campaign during the 2016 EU referendum.

The UK fishing industry believes it was ‘sold down the river’ when Britain joined the bloc because of the principle of granting equal access to all member states.

Brexiteers view regaining control of UK waters as one of the main prizes of leaving the EU because Britain will be free to capitalise on all of its natural resources as an island nation.

When the transition period ends, the UK will be in charge of its EEZ and will be able to decide which other countries will be allowed to fish there and on what terms.

Currently, the Royal Navy Fishery Protection Squadron is tasked with preventing over-fishing and ‘plundering by foreign vessels’ in the EEZ, with enforcement officers able to issue search warrants to make sure rules are being complied with.