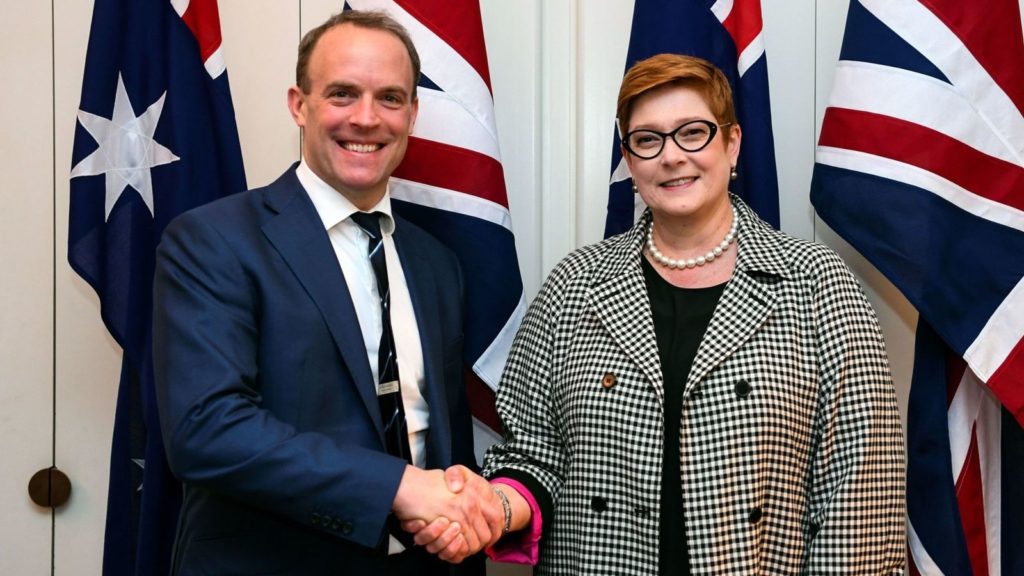 Australia is ready to begin talks on an “ambitious” free trade deal with Britain “as soon as possible”, the foreign secretary has said.

Dominic Raab was speaking after meeting his Australian counterpart at the start of a four-country tour of Asia and the Pacific.

It is his first foreign trip since Britain left the EU last week.

As a result of Brexit, the UK will be able to strike its own trade agreements with nations around the world.

Much has been made of the prospect of a deal with the US, but Australia is another country that is often mentioned among the most likely candidates for an early breakthrough.

Mr Raab emphasised this after talks with Australian foreign minister Marise Payne in the capital, Canberra.

“We’ve recommitted today to launching negotiations on an ambitious free trade agreement between our countries as soon possible,” he said.

“Australia would hopefully be part of that first wave of high-priority deals that we’re pursuing.”

Ms Payne said she was confident that Australia could agree a trade deal with Britain.

She added: “We are … at opposite ends of the world, yet we are very ready and able to grab a new era of opportunity for enhanced strategic and economic co-operation.

“We also look forward to an early, comprehensive and ambitious free trade agreement because we both believe in rules-based markets for trade and investment.”

UK trade with Australia was worth £16.6bn in the year to March 2019, according to the Department for International Trade, with about 150,000 UK businesses exporting to the country.

One thing that is not expected to be on the agenda in the negotiations is visa-free travel between the two countries.

Australia’s trade minister Simon Birmingham told the Sydney Morning Herald last month that he “can’t imagine full and unfettered free movement” would be up for negotiation.

International Trade Secretary Liz Truss promoted the idea of free movement between the two countries during a visit to Australia in September, although she later appeared to step back from her comments.

After Australia, Mr Raab will visit Japan, Malaysia and Singapore.

As part of his tour, he has announced that the UK will invest an extra £1m to tackle terrorism in South East Asia.

The money will help train security officials in the region and strengthen vulnerable borders.