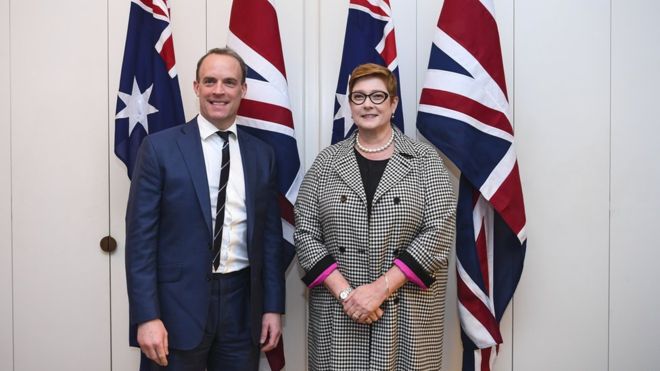 Dominic Raab has said the UK will be “energetic champions of free and open trade” now it has left the EU.

Writing in the Australian Financial Review while on tour in the country, he said the UK was “ready to reinvigorate our ties with old friends”.

The UK is hoping for early trade deals with Australia, New Zealand, Japan and the US after its departure from the EU.

Mr Raab will visit Japan, Singapore and Malaysia over the next few days.

The trip comes after trade minister Liz Truss said the UK was seeking broad reductions in tariffs in a post-Brexit trade deal with the United States.

“We will drive a hard bargain and, as with all negotiations, we will be prepared to walk away if that is in the national interest,” she said in a statement to Parliament.

She claimed any deal would “increase access to the US market for UK businesses, and lower prices and increase choice for UK consumers”.

But Ms Truss said the UK would not compromise on its high animal welfare and food standards and the price the NHS pays for drugs, which she said would not be on the table in trade talks.

Speaking ahead of his visit to Australia, Mr Raab said the UK had “a multi-billion-pound trade relationship with investment in both directions, supporting jobs and growth in both economies”.

Speaking on the BBC’s Politics Live programme in October, former Australian Prime Minister Julia Gillard said: “I do worry that people are starting to imagine that a trade deal with Australia is somehow a substitute for being on the doorstep of a market with 500 million people. It’s not.”

Mr Raab’s visit comes after he said the UK would not be aligning with EU rules, arguing that sticking to these would “defeat the point of Brexit”.

Irish Taoiseach Leo Varadkar has said the UK needs to commit to a “level playing field” to get a free trade deal with the EU.

But UK Prime Minister Boris Johnson has said he will accept no alignment and no jurisdiction of the European courts when talks with the EU start in March.

On Thursday the UK announced a four-week consultation on what taxes on imports, known as tariffs, the UK should apply from the start of 2021.

This is when the current post-Brexit transition period is due to end, and the government hopes to replace EU tariff rates with its own system.

The new tariff regime would apply to imported goods from countries with which the UK does not have its own trade agreements.

Ministers said it would comply with “most favoured nation” rules set by the World Trade Organisation (WTO), under which such countries have to be treated the same when it comes to tariff rates.

The government said it wanted to introduce a system that is simpler than that applied by the EU, with tariffs removed completely on goods where the UK has no or limited production domestically.