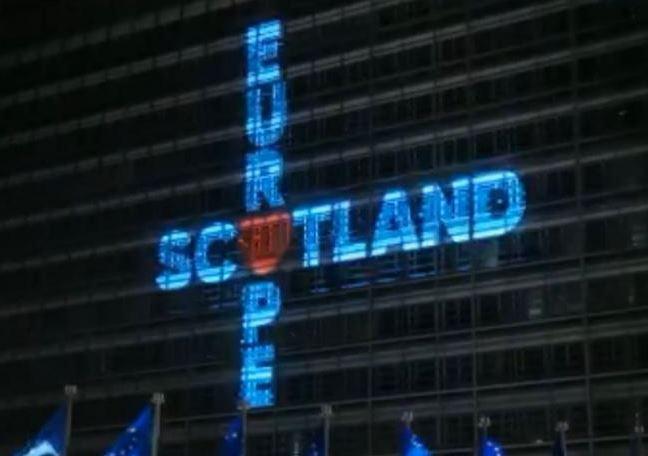 NICOLA Sturgeon is facing fresh questions over her judgment after it emerged an SNP Brexit Day stunt she promoted would ordinarily have been reported to the Belgian Police.

The First Minister suggested the European Commission had “left a light on” for Scotland on January 31 after she tweeted a picture of a “Europe loves Scotland” projection on the Berlaymont building in Brussels.

She wrote: “The EU Commission building in Brussels tonight (and if you look carefully you’ll see that they do appear to have left a light on for us!)”.

However, it later emerged that the light show was arranged and paid for by the SNP and had nothing to do with the Commission.

It was put on by Edinburgh-based firm Double Take Projections.

On Monday, the European Commission suggested the matter was now with the police.

A spokeswoman told a briefing of journalists on Monday that other “third parties” had also projected messages onto the building and had been reported to the police.

EC spokeswoman Dana Spinant said: “In relation to the message projected on to the Berlaymont on January 31 I can confirm, as you already know, it seems this has nothing to do with the commission – we were not in the knowledge of that.

“It’s not the first time where third parties, of all kinds, projected illumination messages on to the Berlaymont – this is something between those third parties and the Belgian police.

“We have nothing to do with that action or with the message that was projected.”

Asked to clarify if a member of the building’s security team had reported the incident to police, Ms Spinant said: “This was part of our ongoing discussions with the Belgian police, which is in charge of many aspects linked to the Berlaymont.

“I know that it was taken up with them. So I can again confirm that it had nothing to do with us and it was simply a matter for the Belgian police.”

However the Commission later changed its position, saying that although such projections were ordinarily reported to the police, this one was not because it was relatively brief.

In a follow-up statement, a spokeswoman said: “The Commission is in close contact with authorities in the event of unauthorised projections to have them stopped, on a general note. However, it was not the case for this particular incident as it was short-lived.”

She is already facing questions about her judgment after the resignation of disgraced finance secretary Derek Mackay for pestering a 16-year-old schoolboy.

Ms Sturgeon let Mr Mackay resign, rather than sacking him.

He is entitled to a £12,000 severance payment for loss of ministerial office.

The Commission’s comments were first reported by the Sun’s Brussels correspondent.

“Quite why the SNP thought it would get away with this virtual graffiti is a mystery.

“Yet again, the nationalists are causing Scotland significant embarrassment at home and abroad.”

Scottish Liberal Democrat leader Willie Rennie said: “Instead of incurring the wrath of the European Commission and the local police, the First Minister should be focussing on getting the basics right back home.

“That means reversing the decline of Scottish education, cutting waiting times in the NHS and investing in the police service. This SNP government is losing the plot.”

Answering questions after a speech at the European Policy Centre, Ms Sturgeon said she had not been contacted by local police authorities.

She also inisted the stunt had generated positive feedback in the Belgian capital and been interpreted as a message of “love and solidarity”.