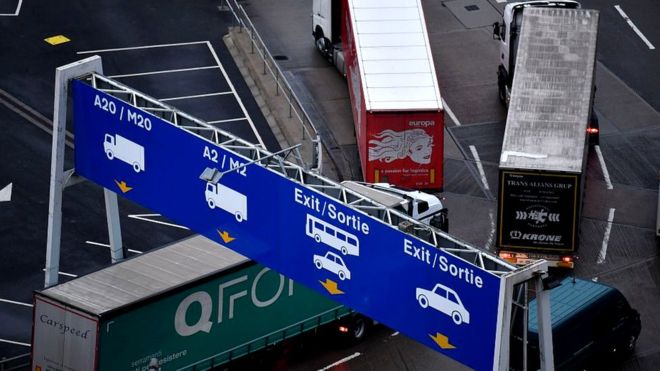 Shoppers will notice the supply issues next January unless there is a “massive upgrade” in border facilities, the British Retail Consortium said.

The warning came after cabinet minister Michael Gove said that border checks are “inevitable” after the Brexit transition period ends on 31 December.

Officials said firms have enough time to prepare for the changes.

Border checks could quickly cause hold-ups at Channel ports of thousands of trucks, including those carrying fresh food, the BRC said.

The government will have to “move fast” to put in place the necessary border infrastructure and staff to cope with those checks by the end of the year, it said.

If it doesn’t, “consumers in the UK will see significant disruption, particularly in the availability of fresh fruit and vegetables” the BRC’s director of food and sustainability Andrew Opie warned.

“If you think this is going to hit us in January, that’s our peak import season for things like fresh fruit and vegetables. Customers are really going to see the problems on supermarket shelves unless we get that infrastructure,” he said.

“So, you’ve got enormous bureaucracy, enormous change, but crucially you’ve got a problem with the infrastructure at the key ports around the Channel, which currently really act as an extension of the motorway for our supply chain, where you will be holding thousands of vehicles every day.”

“I don’t know if you’ve been to Dover recently, but there isn’t an enormous amount of room to hold that infrastructure,” he added.

The warning came after Mr Gove told a Border Delivery Group event on Monday: “The UK will be outside the single market and outside the customs union, so we will have to be ready for the customs procedures and regulatory checks that will inevitably follow.”

The Brexit transition period is due to end at 11pm on 31 December this year.

From then, there will be import checks at the UK border, and traders in the EU and UK will have extra paperwork, the government said.

From next January, all traders will have to fill out customs declarations and be liable to customs checks on goods for cross-channel trade.

If no trade deal is reached with the EU, taxes such as tariffs will also need to be charged and collected.

Facilities such as the Channel Tunnel have been designed for minimal border checks.

New customs infrastructure, facilities and systems as well as staff, agents and vets will have to be in place by the end of this year.

But Mr Gove told the conference there would be light touch administration of trade across the Irish Sea.

However, last week it emerged that Stena Line, the biggest operator of ferries in the Irish Sea, is preparing for trade checks between Great Britain and Northern Ireland.

It was quietly confirmed in a speech. Some might argue it has been inevitable since the election.

Put simply, many industries rely on the frictionless free flow of goods between the UK and the continent.

The unequivocal message from Michael Gove is that businesses should prepare for the the end of that as 2020 draws to a close.

Whereas the impact of all this in the Irish Sea has garnered considerable attention, the new trading arrangements between Dover and Calais and along the Channel Tunnel will have a bigger effect on the economy.

By getting businesses to take the prospect seriously, the government’s hope is that more will be prepared and so delays and disruption can be limited.

But we are dealing with parts of the border that are designed to run without checks.

There will need to be more customs officers, thousands more customs agents, mass recruitment of vets, and new customs posts.

Almost every independent economic analysis – and the government’s own until now – has shown that extra trade friction with what is currently our biggest market will be an overall hit to the economy.

Preparation can help alleviate some of that hit, but not all.

Businesses also said they face extra costs from checks. The British Chambers of Commerce (BCC) said that for many businesses, border delays would incur higher costs than tariffs.

Adam Marshall, the BCC director general, said: “Additional friction will equal higher costs for a lot of our business, and while the discussion over the past few months has focussed a lot on tariffs, it’s actually these border costs… that really is the biggest source of cost for most.”

EU trade will not be waved through with zero checks, which would have been the case under a no-deal Brexit.

Traders will not be able to use special arrangements to lodge new paperwork after a grace period at a later date.

Industries from car manufacturers to food distributors, which rely on the frictionless free flow of goods with the continent, say they face extra costs, delays and red tape from what are known as non-tariff barriers.

Products of animal origin will need export certificates from a registered vet.