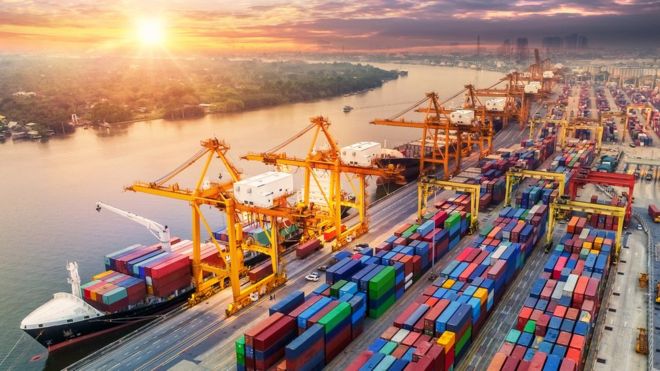 Following Brexit, the UK is free to strike new deals for selling goods and services around the world.

The government will also have to negotiate a new trade agreement with the EU. This will be a top priority, although France has warned the UK to expect a bruising battle.

So, what is free trade and what deals has the UK already done?

What international trade does the UK do?

Selling goods and services to other countries is central to the UK’s economy and supports millions of jobs.

UK trade in goods – the products that can be bought and sold – was worth £840bn in 2018. Of this, cars were the biggest single export at £33.3bn, followed by medicine and mechanical power generators at £24.7bn each.

But trade isn’t all about goods. Services – the skills which a country provides – were worth almost £460bn in 2018. Examples include finance, insurance, accounting and law.

Companies that sell goods abroad will often provide after-sales services as well. For example, a company that sells or leases power generators may also profit from offering maintenance and repair contracts.

Management consulting and technical services were the biggest UK service exports in 2018, worth £81.3bn.

What is a free trade deal?

A free trade deal aims to encourage trade – usually in goods but sometimes in services too – by making it cheaper. It does this by reducing or eliminating tariffs – charges for trading across borders.

Trade agreements also aim to remove quotas – these are limits on the amount of goods that can be traded.

Trade can also be made simpler and faster if countries have the same rules, such as the colour of wires in plugs. The closer the rules are, the less likely that goods need to be checked.

So why have tariffs and quotas at all?

While free trade agreements aim to boost trade, too many cheap imports could threaten a country’s manufacturers.

In order to protect local car makers, for example, a country could impose tariffs on vehicles from other parts of the world.

Why does the UK need an EU trade deal?

The UK will need an agreement with the EU to stop new tariffs and other trade barriers coming into force after the transition period ends on 31 December 2020.

Where does the UK trade? 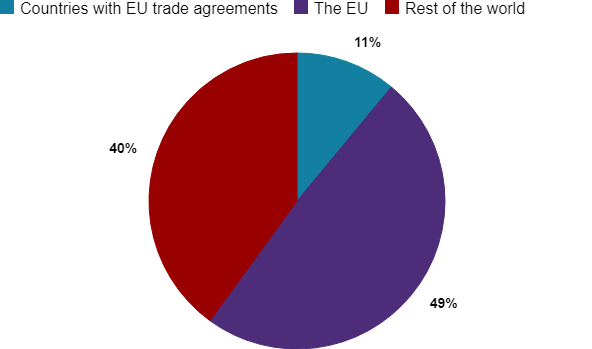 During the transition period the UK will remain part of the EU’s trading arrangements – the single market and the customs union. That means no tariffs, quotas or checks will be introduced.

The point of the transition is to give both sides some breathing space while a trade deal is negotiated, and to give businesses time to get ready.

If any trade deals are reached, either with the EU or other countries, they will not start until the transition period ends.

What about a Canada-style deal?

Prime Minister Boris Johnson has spoken in favour of an EU trade agreement that builds on the deal that Canada has.

Tariffs on most Canadian goods, such as machine parts, have been eliminated. However, there are some additional checks, such as customs and VAT.

The financial sector is important to the UK economy – so getting a deal in this area will be a high priority.

How easy will it be to negotiate a UK-EU trade deal?

Neither side wants tariffs and quotas – so that part of the trade deal could be straightforward.

But getting agreement around rules and regulations could be much tougher.

The UK and the EU currently have the same rules – from the financial help companies are allowed, to the way wine is labelled.

Moving away from some of these rules might make it easier for the UK to secure trade deals with other countries.

But the EU wants the UK’s rules to remain similar, to prevent its companies gaining an advantage.

Even if a trade deal is agreed, it will not eliminate all checks because the EU requires certain goods (such as food) from non-EU countries to be checked.

Time is also a problem. The transition is due to end on 31 December, and formal trade talks are not likely to start until early March.

If negotiators fail to reach a deal, the UK faces the prospect of trading with the EU under the basic rules set by the World Trade Organization (WTO).

If the UK had to trade under WTO rules, tariffs would be applied to most goods which UK businesses send to the EU. This would make UK goods more expensive and harder to sell in Europe.

Having WTO terms would also mean full border checks for goods, which could cause traffic bottlenecks at ports.

And the UK service industry would lose its guaranteed access. Qualifications would no longer be recognised and it would be much harder for workers to travel to the EU.

This would affect everyone from bankers and lawyers, to musicians and chefs.

What trade deals has the UK done so far?

While it was an EU member, the UK was automatically part of around 40 trade deals the EU had struck with more than 70 countries.

In the run-up to Brexit, the UK was given permission to copy these agreements. So far, the UK has managed to agree 20 such deals, covering 50 countries or territories. These represent just over 8% of total UK trade.

The following deals are expected to take effect at the end of the transition period, according to the Department for International Trade: