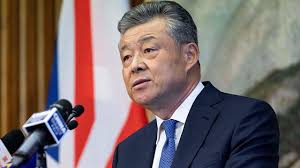 China is ready to restart preparatory work with British officials on a future trade deal after a feasibility study was quietly paused last year during the Brexit deadlock, a top diplomat has said.

Liu Xiaoming, the Chinese ambassador to London, said it may take time before the two sides have detailed discussions as his country focuses on battling the coronavirus and Britain’s newly-elected government settles in.

But he told Sky News the will is there “to engage each other more positively”.

“When it comes to a trade deal, we are open,” the seasoned diplomat said in an interview at the Chinese embassy in London.

Mr Liu said the two countries had set up a working team to study the feasibility of the trade deal last year, but the British government had been focused on Brexit and its “top priority” was to negotiate with the EU.

Asked whether the working team had restarted after its efforts were paused, Mr Liu said: “We are ready to work with our British colleagues any time.”

He said British officials had also “expressed a willingness” to restart talks.

The two men discussed China’s fight against the outbreak of COVID-19, the disease caused by the coronavirus, as well as their hopes to strengthen bilateral ties, according to the ambassador.

Mr Johnson had expressed plans to “fight shoulder to shoulder” against COVID-19, and also told Mr Xi that he “loves China” and wants to work with Beijing to lift bilateral relations to a new level.

“They had a very good conversation,” Mr Liu said.

Mr Xi told the prime minister he appreciated a message of support he received from the Queen.

Mr Liu was not able to say whether the virus had reached its peak but pointed to what he said were some positive signs that day, calling them “three firsts”.

“That shows the quarantine measures are taking a very good effect,” he said.

He strongly defended his government’s efforts to tackle the disease from allegations that the response was too slow and there were attempts at a cover up.

“I can say in the very certain term that the government made every effort to address this challenge,” the ambassador said.

“The government also tried every effort to be transparent, to share all information with the World Health Organisation, also other relevant countries including the UK.”

He batted off any suggestion Mr Xi had not responded quickly enough.

“I think the whole world should appreciate what China has done.”

The ambassador appeared hopeful Britain would change its travel advice to British nationals in mainland China, after they were urged to leave the country because of the outbreak.

He said China was “making progress” and he hoped the British advice would be adjusted as things improve.

The virus would have an impact on China’s economy but only in the short term, the ambassador said.

“I think in the long term the Chinese economy is still good. President Xi told Prime Minister Johnson that we are confident that we will reach the target of our economic development for this year,” he said.

The diplomat said the pair also “talked about the relationship, how the two countries will strengthen this relationship for the next ten years”.

The men discussed a global conference on climate change that the UK will host this year.

Mr Johnson said he believes “there are a lot of opportunities for China and the UK to work on the global agenda to address the global challenges like climate change”, according to the ambassador.

He said the conversation “not only set the tone but also set the new direction for China-UK relations at a critical moment.”

Asked if the Chinese technology company Huawei came up in the exchange, the ambassador said he did not have that information.

Last month, the UK decided to defy US pressure to block Huawei from taking part in the UK’s next generation 5G network over security concerns.

Analysts believe the decision will doubtless have helped nurture the goodwill that seems to be flowing from Beijing to London.

Mr Liu said the phone call should not be linked to any single issue.