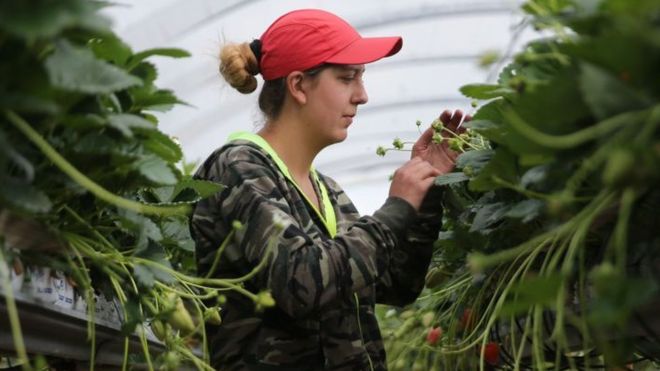 The government has announced its plans to introduce a “points-based” post-Brexit immigration system.

Low-skilled workers will not receive visas and the Home Office said EU and non-EU citizens coming to the UK would be treated equally after UK-EU free movement ended, on 31 December.

But how will the new laws affect some sectors?

The broad promises of Brexit are giving way to its detailed consequences.

This will be a huge change in the way the UK economy works – and a big challenge for businesses reliant on lower-skilled European workers.

The government says ending free movement of labour from the EU helps fulfil the referendum pledge to regain control of national borders.

It wants to focus on recruiting the “brightest and the best” from around the world.

But there are plenty of jobs the brightest and the best don’t want to do.

She says eight million 16 to 64-year-olds are “economically inactive”.

But many of these are students, carers or long-term sick – it is not a guaranteed pool of available labour.

And that’s why many businesses are warning of staff shortages if they are not given more time to adapt.

Most people employed by the adult social care sector are low-paid workers providing daily help to older and disabled adults in care homes and the community.

And foreign nationals currently make up a sixth of the 840,000 care workers in England.

But under the new system, foreign nationals applying to work in the UK care sector seem certain to fall well short of the 70 points required.

Care work is not classed as a shortage occupation, even though one in 11 posts is currently unfilled.

And even if care work were to be classed as a skilled job – and even that is in doubt as many workers do not come via an A-level route – the pay, at under £20,000 on average, is too low to qualify for any points.

Construction relies on foreign migrants for 10% of its workforce – 8% from the EU and 2% from the rest of the world.

This reliance on foreign-born workers is much higher in the south-east of England.

Major infrastructure projects including HS2, the proposed building of a third runway at Heathrow, and ambitions to build more than 200,000 new homes per year mean that many construction firms fear that there are simply not enough spare UK workers to fill the gap these new measures will create.

The concern about the points-based system within the NHS is not quite as great as it is in the social care sector.

Foreign nationals make up 13% of the workforce.

But there are a number of jobs on the shortage-occupation list, including nursing, which will make it easier to attain the 70 qualifying points.

The pay attached to such jobs, unlike that of social care workers, will mean they can gain points too.

Nearly one in 10 doctors currently comes from the EU – but because of the high-pay, high-skilled nature of these roles, the risk is much less.

Lower-paid staff, such as healthcare assistants and porters, could be affected though.

And all this must be put into the context of the growing vacancy rates in the NHS – one in 12 jobs is unfilled in England.

More doctors and nurses are being trained but it will be a number of years before they qualify.

And in the meantime, a smooth supply of foreign workers will be vital.

Universities are international places – in terms of students, staff and research projects – so they’ve been nervous about changes to migration rules following Brexit.

But they might take some reassurance from a points system weighted towards scientists and researchers.

For instance, even if a maths researcher has a salary below the minimum threshold, they might still get enough additional points from having a PhD.

The fast-track “global talent” entry route will be seen as recognition of a competitive, international market in attracting top scientists.

Universities have already welcomed allowing international students to work in the UK for two years after graduation – an incentive to recruit more of them.

But there are concerns such as losing staff below the income threshold, such as laboratory technicians.

There are also fears that EU student numbers could fall – and unresolved questions about Erasmus student exchanges and access to multi-billion EU research projects.

The technology industry has had one big concern about Brexit – not trade barriers, but access to talent.

The UK, and London in particular, has been a magnet for talented tech workers from across Europe and the rest of the world, and that in turn has made it an attractive destination for investment by the big technology firms.

They had lobbied hard against the £30,000 salary threshold for new migrant workers, fearing it would exclude many entry-level jobs, so they are celebrating its lowering. The industry is also delighted that the new system explicitly welcomes workers with Stem qualifications.

Its only worry is a practical one. With changed immigration rules due to come in at the beginning of 2021, companies are concerned that there is little time to prepare for what could be a very complex new system.

The farming industry has raised strong concerns about being able to access enough workers, as it relies heavily on staff from abroad – including pickers, packers, meat processors and vets.

A pilot seasonal-workers scheme, which allows temporary workers from outside the EU access to the UK at harvest, will be quadrupled to 10,000 places this year – but farming organisations say 70,000 are needed.

Vets, while higher paid, still depend on half of their new entrants coming from abroad, most from the EU. They feature on the shortage occupation list, but the British Veterinary Association warns even more will be needed to certify exports and imports under the government’s trade blueprint.

8. Visas may be harder for retail workers

People wanting to come to the UK to work in shops and cafes are likely to find it difficult to get a visa in the future.

Anyone already here working in retail jobs will be able to stay and apply for settled status.

But those wanting to come to the UK after the end of the transition period will need an offer of a “skilled” job paying more than £25,600.

Under the current system for people from outside the EU, to be considered “skilled” for the purposes of getting a visa, you normally need to be doing a degree-level job. This threshold is being lowered to jobs requiring A-levels or equivalent.

Exceptions to this are for jobs on the shortage-occupation list.

Some very senior and specialist types of chef can come to the UK on this visa – but most people in hospitality, or retail, won’t count as either skilled or in demand enough to qualify.

At the moment, an estimated 228,000 people from the EU are working in “accommodation and food services”.