Low-skilled workers would not get visas under post-Brexit immigration plans unveiled by the government.

It is urging employers to “move away” from relying on “cheap labour” from Europe and invest in retaining staff and developing automation technology.

The Home Office said EU and non-EU citizens coming to the UK would be treated equally after UK-EU free movement ends on 31 December.

Labour said a “hostile environment” would make it hard to attract workers.

But Home Secretary Priti Patel told BBC Breakfast the government wanted to “encourage people with the right talent” and “reduce the levels of people coming to the UK with low skills”.

She added that businesses could also recruit from among eight million “economically inactive” potential workers in the UK.

But the SNP called this a “ridiculous or dangerous idea”, as many in this group were suffering “ill health or injury”.

Under the plan, the definition of skilled workers would be expanded to include those educated to A-level/Scottish Highers-equivalent standard, not just graduate level, as is currently the case.

Waiting tables and certain types of farm worker would be removed from the new skilled category, but new additions would include carpentry, plastering and childminding.

How would it work?

The government wants to bring in a “points-based” immigration system, as promised in the Conservative election manifesto.

Under this, overseas citizens would have to reach 70 points to be able to work in the UK.

Speaking English and having the offer of a skilled job with an “approved sponsor” would give them 50 points.

More points would be awarded for qualifications, the salary on offer and working in a sector with shortages. 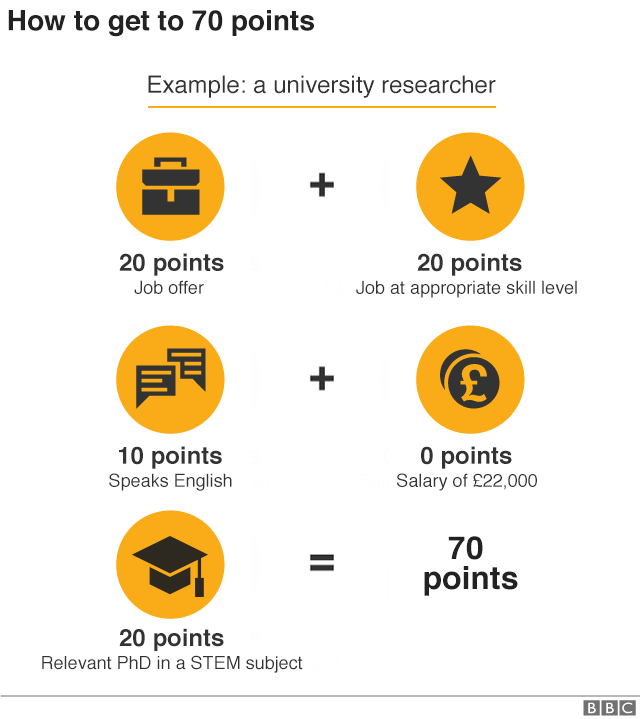 Workers from European Economic Area countries currently have the automatic right to live and work in the UK irrespective of their salary or skill level.

The government says this will end on 31 December, when the 11-month post-Brexit transition period is due to finish.

However, the government says the threshold would be as low as £20,480 for people in “specific shortage occupations” – which currently include nursing, civil engineering, psychology and classical ballet dancing – or those with PhDs relevant to a specific job.

But there would no longer be an overall cap on the number of skilled workers who could come into the UK.

Problems ahead for social care

The majority of people employed by the sector are low-paid care workers. They are responsible for providing daily help to older and disabled adults in care homes and the community.

There are already significant shortages – one in 11 posts are unfilled.

Foreign workers make up a sixth of the 840,000-strong care worker workforce in England. It is hard to see how in the future these staff could qualify.

Even if it is classed as a skilled job – and even that is in doubt, as many workers do not come via an A-level route – the pay at under £20,000 on average is too low to qualify for any points. Nor is the role classed a shortage occupation.

It seems certain applicants will fall well-short of the 70 points needed.

What about lower-paid sectors?

The government said it would not introduce a route for lower-skilled/lower-paid workers, urging businesses to “adapt and adjust” to the end of free movement between EU countries and the UK.

Instead, it said the 3.2 million EU citizens who have applied to stay in the UK could help meet labour demands.

But bodies representing farming, catering and nursing are warning that it will be hard to recruit staff under the new system.

The Royal College of Nursing said the proposals would “not meet the health and care needs of the population”.

And the Food and Drink Federation spoke of concerns about bakers, meat processors and workers making food like cheese and pasta not qualifying under the new system.

However, the government pointed to a quadrupling of the scheme for seasonal workers in agriculture to 10,000, as well as “youth mobility arrangements”, allowing 20,000 young people to come to the UK each year.

Laura, an Italian living in London, says the government’s proposals are “short-sighted”.

She is now a communications manager but worked as a waitress when she arrived in the UK in 2015. Laura says she would not have met the new points requirements if they had been in place in back then.

“Through the complete dismissal of low-skilled workers, it fails to acknowledge that people who start at a lower skill level often progress further up the ladder, thus increasing their tax contribution over time,” she says.

“Also, low-skilled workers are as vitally needed by any economy as high-skill people are.”

Under the plan, all migrants would only be entitled to access income-related benefits until after indefinite leave to remain is granted, usually after five years.

Currently, EU nationals in the UK can claim benefits if they are “economically active”. Non-EU citizens become eligible for benefits when they are granted permanent residence, which usually requires five years of living legally in the UK.

What is the political reaction?

For Labour, shadow home secretary Diane Abbott said the government did not “appear to have thought through what the effects of this policy will be on the economy as a whole and what message it sends to migrants already living and working here”.

And Scotland’s First Minister and SNP leader Nicola Sturgeon said the plans would be “devastating” for the Scottish economy.